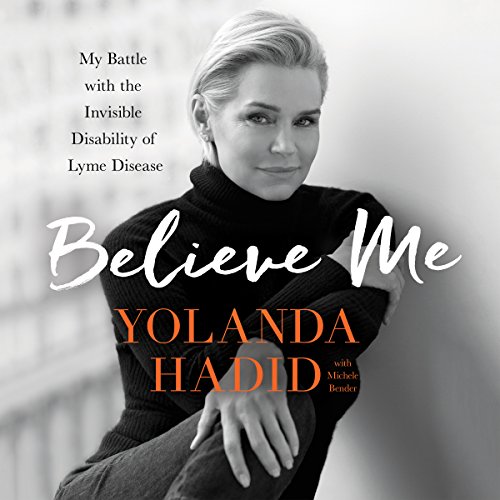 By: Yolanda Hadid
Narrated by: Daisy White
Try for $0.00

This program includes an introduction and bonus interview with the author.

From the star of The Real Housewives of Beverly Hills comes an emotional and eye-opening behind-the-scenes look at her descent into uncovering the mystery of chronic Lyme disease.

In early 2011, Yolanda Hadid was struck by mysterious symptoms including brain fog, severe exhaustion, migraines, and more. Over the months and years that followed, she went from being an outspoken, multitasking, hands-on mother of three, reality TV star, and social butterfly to a woman who spent most of her time in bed. Yolanda was turned inside out by some of the country's top hospitals and doctors, but due to the lack of definitive diagnostic testing, she landed in a dark maze of conflicting medical opinions, where many were quick to treat her symptoms but could never provide clear answers to their possible causes.

In this moving behind-the-scenes memoir, Yolanda opens up in a way she has never been able to in the media before. Suffering from late-stage Lyme, a disease that is an undeniable epidemic and more debilitating than anyone realizes, Yolanda had to fight with everything she had to hold on to her life. While her struggle was lived publicly, it impacted her privately in every aspect of her existence, affecting her family, friends, and professional prospects. Her perfect marriage became strained and led to divorce. It was the strong bond with her children, Gigi, Bella, and Anwar, that provided her greatest motivation to fight through the darkest days of her life. Hers is an emotional narrative and all-important listen for anyone unseated by an unexpected catastrophe.

With candor, authenticity and an unwavering inner strength, Yolanda reveals intimate details of her journey crisscrossing the world to find answers for herself and two of her children who suffer from Lyme and shares her tireless research into Eastern and Western medicine. Believe Me is an inspiring lesson in the importance of having courage and hope, even in those moments when you think you can't go on.

What listeners say about Believe Me

It is not often that any of us have an opportunity to witness a battle from the front lines. Yolanda's journey through this horrific epidemic is almost impossible for most of us to fully understand unless living it. This book chronicles her process, her fortitude, her faith and strength to meet the battle " head on" add to reach the point where she has made this disease cry "uncle"! If you know anyone suffering with any chronic illness help them! Send them this book on audible since many have a difficult time reading. Never give up on them for the end of the day knowing you have your Warriors with you help you find your recovery.

Her Truth Moved Me

Her raw and honest truth was moving. She sheds light on both a horrible disease and human nature.

For me this validates her truth and passion that you can hear running so deep in her.

Thank you for sharing your story, Yolanda. Beautifully written and narrated. Your courage is contagious. And, a big hug for making an audio version for those of us struggling with brain fatigue and vision problems. xoxo

Thank you Yolanda for writing my story, but without all the trial and error that you had to experience. I too laid in bed for hours, days, weeks, years and my husband divorced me because he couldn't understand.

I would be in bed all day with extreme fatigue and then eventually pain and fatigue. I would drag myself out of bed around 2 pm to take a shower (some days) and pick up my kids from school with a smile on my face. Going to the grocery store or running errands was extremely difficult. I'm starting to feel better and can work part-time. Antibiotics helped, but the arthritic pain is unbearable some days. Lyrica has helped me get through the days. My rheumatologist told me at the age of 45 that I couldn't have arthritis bc I'm too young! Doesn't matter that you have Lyme or possibly any other issues or are in arthritic pain.

I finally told my 17 year old daughter last year so that she would understand why I'm not always physically there with her or for her. I'm about to tell my son the same, but so scared since my husband doesn't think fibromyalgia exists let alone Lyme. I don't know if my son will believe me. Wish me luck with my journey! Thank you for being my warrior.

I do wish you had information on what we should do next to rally legislative support. Who should we contact?

This book gives me the desire to continue the good fight. I have Sjogrens and at times it's a lonely world, the world of suffering. Thank you Yolanda for opening up to the world in such a raw fashion. You are a beautiful soul.

Possible best book I have ever listened to

Yolanda Hadid said in the book she is not an author but I don't believe that to be true. Her story is so moving. The way she tells it makes you feel you are right there with her. Good luck Yolanda. I am praying for you and your children.

So heartwrenching yet inspiring and informative!

Listened to this while working over the course of 4 days. There are parts where it was near impossible not to show emotion. I still hold firm to my personal opinion that David Foster is just possibly one of the most remarkably selfish and thoughtless individuals. It also appears his 'apples' haven't fallen far from that tree. Yolanda Hadidi's actions eximpify someone I would treasure as a friend and confidant. I hope her health, personal and families journey trajectory continues to soar!

Such a beautiful and complex story of Yolanda's uphill battle to get the invisible illness known as Lyme Disease into remission. I also am fighting Lyme but very thankful Yolanda has been so public. She's made it her life's mission to get Lyme awareness out there, find answers & treatments, help others, and be an advocate for so many suffering that have no voice. I cried many times listening to this book--not just because I could relate but there are so many touching moments between Yo and her kids and also with Ellie. I have also come away feeling like I would love to have Yolanda as my friend. She has the same values that I hold dear to my heart as a mother, wife and true friend. Side note: It was fun to hear that she lived in Santa Barbara since I live in Santa Barbara County, myself!)

Her story is raw. She did out a lot of personal touch and opinions!! They are honest and straight forward.

I am a lymie also and I have been infected ever since I was a little girl myself. My symptoms were mainly in my gut and on my skin. Later I developed a lot of other symptoms.

But I was not diagnosed till 39 years later. This is too long for one to suffer Esp after one went to many drs.

Thanks for this book and inspiration!!

So glad she wrote this book. Lots of good information. Nice to know I'm not alone.

Had to stop and return this book. Utter tripe and if it were a real book I’d wipe my bottom with the pages

I read this book in 2 days on audible and thought it was brilliant and could identify with so much of her journey . I hope she writes another with more information about her diet and what does and doesn't help . I agree that this is her purpose and God couldn't of picked anyone better as she has all of the qualities , strength , determination and genuine love to continue her fight in finding a cure . Brilliant xx 💞💞💞💞💞💞💞Thank you Yo 🙏😀💞

The book is touching, necessary, and inspiring. As someone who has suffered in similar ways Yolanda is bringing the story to a wider audience. Good on her.

Such a heartbreaking story about Lyme disease. Lyme disease is real and this story raises awareness of it.

A very interesting read by the author herself who had this debilitating disease,well told,enjoyed very much .

for anyone struggling with any chronic illness

I don't have lime, but am fascinated by the warrior spirit Yolanda has. her honesty and integrity are inspiring to me. I hope a cure will be found in our lifetime.

the narrator was very clearly spoken , she actually sounded like Yolanda , this covered Yolandas life with Lyme very well and makes it easier to understand the dreadful Lyme symptoms people go through , anyone who knows someone with Lyme's should read this to understand, I don't have Lyme I have fibromyalgia and lupus but there is so much that we suffer the same .

must read for invisible illness sufferers and fam

A book not only for lyme but also for any chronic illness, especially those of which are invisible..aswell as for anyone who has dealtt with a debilitating and life shattering illness. Get the whole family to listen/read. Great for those whom feel lost and swallowed up by the hole of fatigue and pain and makes you feel less....alone. chronic invisible illness can be difficult and i thank yolonda greatly for being brave enough and kind enough to use her sittuation and status to investigate and report her findings and experiences to the world in hope to gain u understanding, equality and relef/medical advancments which we o  the other side of the spectrum can learn about and decide without going bankrupt. Narrayion is beautiful and i acctually thank my brain for not being able to retain anything as reading this again ( 3 times normally locks it in) is exciting and not frustrating for once. You are a hero. Thank you