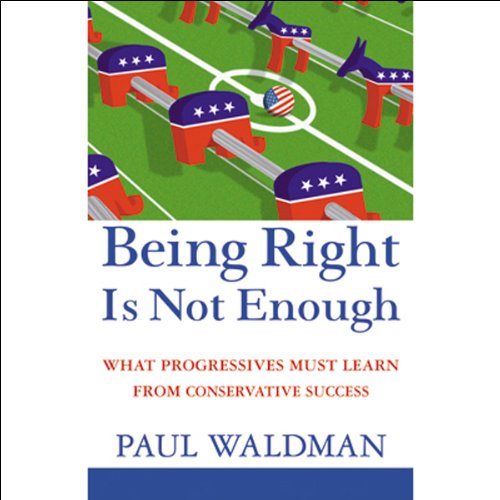 Being Right Is Not Enough

By: Paul Waldman
Narrated by: Sandra Swafford
Try for $0.00

The 2006 election was a major turning point for the Democratic Party, but they'll need more than the Republicans' poor poll numbers to build a new progressive majority. Can progressives turn the tables by understanding and adapting the highly successful strategies and tactics developed by the right?

In Being Right Is Not Enough, political analyst Paul Waldman offers Democrats and progressives a clear-eyed, multifaceted strategy for victory in elections, policy debates, and the fundamental battle between progressivism and conservatism. The time has come, he says, for progressives to borrow several pages from the right-wing playbook and beat them at their own game. The book outlines an exhaustive list of things progressives must do, and do soon, including:

Just what the pollster ordered for the Democratic Party, Being Right Is Not Enough provides a hard-hitting, insightful, and pragmatic vision for progressives of every stripe who are tired of losing and ready for victory.
©2006 Paul Waldman. All rights reserved (P)2006 Polity Audio LLC
Conservatism & Liberalism Democracy
Show more Show less

What listeners say about Being Right Is Not Enough

When does it Start

I agree. The Democrats do need to start to define who they are and what they stand for. Blaming the media for their ineptitude to put out their message is a non-starter. The author tries to lay out a foundation for the Democrats, but I just kept thinking to myself, I couldn't go for that. The book is very well intentioned and focused. It's circumspect, critical, honest and penetrating. Ultimately, i hope the Dems take the advice. It will improve the next General election.