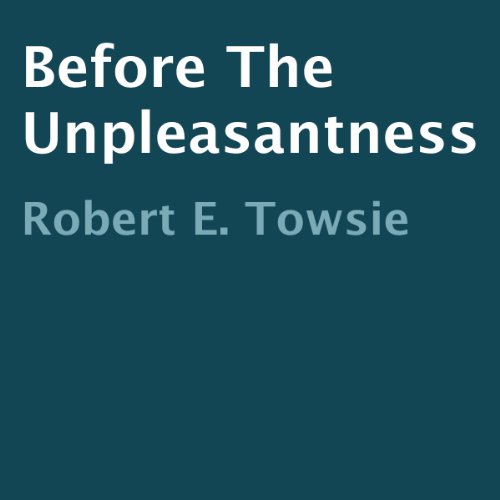 I am sure you have heard of "Operation Mincemeat", the ingenious plan to land a dead man on a Spanish beach - to fool the Nazis and send their jack-booted, Panzer-clad, stiff-armed, blond-haired boys up the wrong alley.

Allow me to let you into a secret. I was the rehearsal, some months before hostilities began; before the unpleasantness, so to speak. I was the practice run; the "upper-class twit" sent on a wild goose chase, scattering fair Albion's imminent enemies hither and thither. And, if I were to die in the process, so be it. So long as the suitcase full of faux documents survived, I, Pelham Hardiman was of no consequence. But, my friend, I can tell you their greatest error, their erreur greates, they forgot they were dealing with an Englishman, and a Hardimann at that. And let us not forget the femme fatale.

What disappointed you about Before the Unpleasantness?

This seems like a good book spoiled by budget production. The story is read by the author, who does a fairly decent job of it, is good at accents etc. but, in the end, is not a professional actor and after a while the narration begins to grate. At some points it is possible to hear traffic in the background, as if it has been recorded at the author's flat. It made me wonder at Audible's quality control - when I go to a book shop I don't expect to pay full price for home-made manuscripts, so why should I be sold them here?

Would you consider the audio edition of Before the Unpleasantness to be better than the print version?

The audio narration is excellent. Characters are all in recognisable, clear voices. Superb quality!

I have read the book in kindle form and enjoyed it immensely. I wanted the audio version so I could listen to it in the car during a long journey down to Devon. I think both the book and the audio are as good as each other. Although the audio has brought the characters to life in a way a book can only achieve to a certain extent.


What other book might you compare Before the Unpleasantness to and why?

Jeeves and Wooster type of characters and witty lines all the way through.

What about Robert E. Towsie’s performance did you like?

If you could take any character from Before the Unpleasantness out to dinner, who would it be and why?

Pelham Hardimann is 'Jeeves fallen on hard times' type main character who is so witty and you can't help rooting for him during his almost impossible mission to retrieve the suitcase.

Excellent story. Packed with action and as funny as it gets! Highly recommend this author!

The style is like a cross between Poirot and Bertie Wooster. A fun listen with a cleverly written and crazy plot.

I enjoyed this comedy very much. I'd not heard about Operation Mincemeat before, but it's based on that. I looked it up and found out it was a plan to make nazis think the documents in the suitcase were real plans from the British. Great take on the operation.

Great narration and very funny! Characters are full of life and you root for the main character big time!