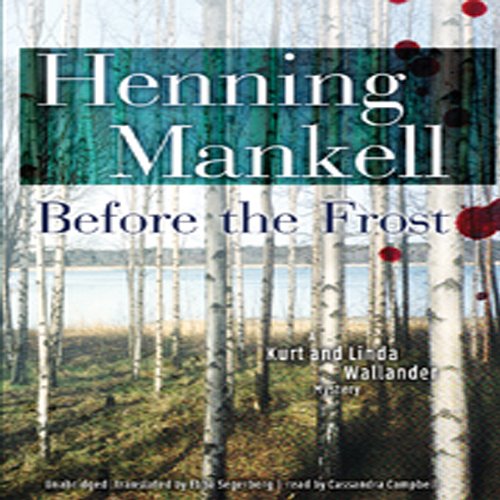 In this latest atmospheric thriller, Kurt Wallander and his daughter, Linda, join forces to search for a religious fanatic on a murder spree.

Just graduated from the police academy, Linda Wallander returns to Skane to join the police force, and she already shows all the hallmarks of her father - the maverick approach, the flaring temper. Before she even starts work she becomes embroiled in the case of her childhood friend, Anna, who has inexplicably disappeared.

As the case that her father is working on dovetails with her own, something far more dangerous than either could have imagined begins to emerge. They soon find themselves forced to confront a group of extremists bent on punishing the world's sinners.

What listeners say about Before the Frost

This audiobook takes the number one slot on my list of downright peculiar narrative interpretations. Cassandra Campbell does not seem clear on what basic punctuation means to a sentence (pause for commas, full stop for periods). She sounds like she thinks she is reading poetry or something, drawing out syllables in odd ways. The list of irritating choices she made is, for me, a long one, but most egregious is that she read every line of dialogue that Kurt Wallander uttered in a scornful angry tone of voice that was really odd and irritating - even the most benign statements he made were snarled. It was incomprehensible. I've listened to every Wallander - Dick Hill is amazing (he does the first 6 or 7), then the guy who does Return of the Dancing Master was ok but not great. I'd avoid Cassandra Campbell at all costs. I usually get through an audiobook in a few days - this one took me six weeks of pure determination to complete - I could only take listening to her in small doses!

What confluence of events?

What confluence of events came together to make this a terrible, terrible listen?

I agree that with many of the other reviews that the narration of this book was very hard to listen to. Not the least of which was the difference in pronunciations... Not being Swedish, I do not know which narrator used the correct pronunciation, but after having listened to nine previous books, I continually felt (and sometimes did) that I needed to correct her pronunciation. There should have been continuity between the reads...

I also wonder if there was an element to the translation of the book that cause my bad opinion of this book. I have really enjoyed Mankell's previous books, but this one did not even seem to be written by him. The essence and flavor of all of the characters felt wrong. Perhaps, as Mankell was writing/telling the story from a different character's point of view, he changed the feel of them, or it was the translation, or it was the narration, or a combination of all three.

I have to say, if this was the first one of his audiobooks I had purchased, it would have been the last. As it was, the only reason I forced myself to listen to it all is that to not listen would have been a waste of money.

Not the Best Wallander

I love Wallander and I like the idea of Wallander and daughter Linda working together. But this one was very tedious, with lots of "and she walked and opened the door, and walked to the chair, and walked back over to the door, and looked out" and on and on. Tedious too was all the awkward antagonism between Linda and her mother as well as her father. A very unbelievable, uncomfortable scene between Linda and mom. And the mystery didn't amount to much; the ending was quite aniclimactic. This one just didn't have the oomph or the sensitivity of other Wallander novels.

The narrator Cassandra Campbell really ruins the character of Wallander with her voice. She turns him into a completely different person then the one i had know in all the other Mankell books I have read. She is completely insensitive when imitating male voices. It was very upsetting to listen to this misinterpretation.

terrible reader - arghh - what a disappointment

I've enjoyed the other Mankell novels very much. This narrator, destroys the book. the worst.

A Chore to Listen To

I hate to give this a "starred" rating since I'm only a third of the way through it, but just want to say that the reader is hard to take. I loved Dick Hill's readings, and just hope nothing has happened to him. First of all, when a main character is inside his head as much as Wallender is, the reader should be a male. Second, a new reader should always listen to the former reader--especially one who has read six books in the series--to continue the pronunciations as expected, and the interpretation of the character we have come to know. I'm sorry that Blackstone didn't follow these rules. It takes away from the experience.

Comparing the narrative of ALL the Kurt Wallander novels on Audible to this ONE Linda Wallander novel I am finding a disturbing difference in the pronunciation of ongoing characters and towns: Such as Kurt's horse-breeder friend (forgive me I do not know how to spell it as I have not read the book only listened) Sten Wyden, his colleague Rydberg and the his home town of Ystad, just to name a few as I am only on Chapter 8. Now I am assuming, of course, that Dick Hill and the other narrators were given instruction and they are pronouncing these names correctly! I would just expect more uniformity since the author is the same and is writing about the people and places.

I'm a Mankell fan, feeling let down after this listen. The reader's style was disappointing and detracted from my enjoyment of an entertaining story.

The narrator's Swedish pronounciation is seriously flawed; the attempts at different dialects seemed strained and slightly Irish-sounding to my ears. Wallander's vocal characterization came across as angry and irritable - not in line with the novel's events and inconsistent with the author's representation of his personality in this book and throughout the series.

Not so good this time

I have read most of Henning Mankell's books and gave all of them a five star. The problem with this book was the reader. Most unfortunate. She did a fine job with the character, Linda but just couldn't pull off Wallender. I liked Walleneder in former books. And the main reason is because he's human. He deeply cares about people, and particularly his daughter. Although he can be impatient, he's not mean. The reader's depiction of Wallender was that he was mean and unlikable. He loves his daughter and yes, they have a conflicted relationship, but in previoius books, you feel the soft spot and he has for her. The story is good, but if people don't read the other books, they might be quite disappointed in this one and not read more of his books. I can really see how a reader can make or break a book. I stayed with it because the story was good. If I hadn't read so many of his other books, I wouldn't have finished it. She ruined Wallender as I've come to know him.

I am tired of deranged religious fanatics on a murder spree. As criminals to place against your favorite cop/detective they offer lots of opportunity for excessive blood and gore, but are unsatisfying as to the motive or to the unraveling of the mind behind the mystery.