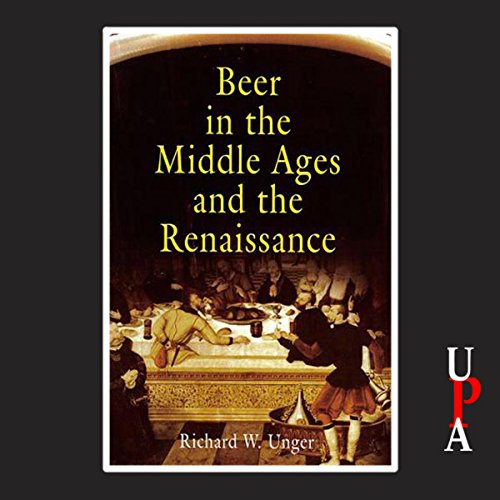 Beer in the Middle Ages and the Rennaissance

Modern beer has little in common with the drink that carried that name through the Middle Ages and Renaissance. Looking at a time when beer was often a nutritional necessity, was sometimes used as medicine, could be flavored with everything from the bark of fir trees to thyme and fresh eggs, and was consumed by men, women, and children alike, Beer in the Middle Ages and Renaissance presents an extraordinarily detailed history of the business, art, and governance of brewing.

During the medieval and early modern periods beer was as much a daily necessity as a source of inebriation and amusement. It was the beverage of choice of urban populations that lacked access to secure sources of potable water; a commodity of economic as well as social importance; a safe drink for daily consumption that was less expensive than wine; and a major source of tax revenue for the state.

"This is an important book on the history of beer and brewing and is a valuable resource." ( Choice)

I was expecting information about the brewing and use of beer in the Middle Ages. This book had a little of that, but it was mostly market data about how much was produced in particular regions and where it was distributed. The interesting information got lost in the marketing data. I did not finish the book, which is rare for me.

A detailed and exhaustive study

This is a thorough, scholarly analysis of government regulations and tax records to shed light on developments in the production and use of beer and ale in the Middle Ages and Renaissance. Unger covers ingredients, recipes, nutrition, technology, distribution, taxation, regulation and consumption. He draws some interesting conclusions about industrial, commercial, political and social developments involving beer in the Middle Ages and Renaissance and also provides contrasts with developments in some other industries of the times. While Unger uses his conclusions to throw some light on broader aspects of life in those times, he explicitly leaves most of such analyses to future scholars.

I want to rate this higher...

But the truth is, it was just pretty dull. I love beer and brewing and how it links generations for all of mans history. I figured that has to make a great book right? Well sort of. The information and amount of research required to compile it must have been staggering, this must be applauded. But the telling of the story was just kind of dull. I found myself drifting in thought and missing chunks of the book and not caring enough to rewind it.
I recommend it, but only if you really want to know about the subject.

I'm a graduate student reserving beer in the Middle Ages, so this book was great for what I needed. Pretty dry though, so if you're looking for an entertaining book, this is not it.

Not for casual beer tourists, but rich info for serious aficionados and historical research

Not for casual beer tourists but rich info for serious aficionados and historical research. Lots of cool stuff

I was hoping for more on brewing and the social history of beer, have not finished this book may come back to it......