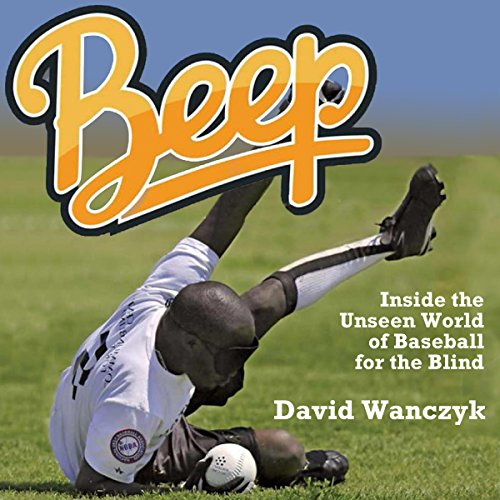 By: David Wanczyk
Narrated by: Doug McDonald
Try for $0.00

In Beep, David Wanczyk illuminates the sport of blind baseball to show us a remarkable version of America’s pastime. With balls tricked out to squeal three times per second, and with bases that buzz, this game of baseball for the blind is both innovative and intense. And when the best beep baseball team in America, the Austin Blackhawks, takes on its international rival, Taiwan Homerun, no one’s thinking about disability. What we find are athletes playing their hearts out for a championship.

Wanczyk follows teams around the world and even joins them on the field to produce a riveting inside narrative about the game and its players. Can Ethan Johnston, kidnapped and intentionally blinded as a child in Ethiopia, find a new home in beep baseball and a spot on the all-star team? Will Taiwan’s rookie MVP Ching-kai Chen - whose superhuman feats on the field have left some veterans suspicious - keep up his incredible play? And can Austin’s Lupe Perez harness his competitive fire and lead his team to a long-awaited victory in the Beep Baseball World Series?

Beep is the first audiobook about blind baseball.

"Entirely compelling and fully realizable for the general reader. It's unusual, witty, and quite needed.” (Stephen Kuusisto, author of Planet of the Blind)

“A fun and funny and supremely humane piece of sportswriting, a reminder of what sports are for.” (David Roth, writer, VICE Sports and cofounder, The Classical)

What listeners say about Beep

A great book; a good performance

Very well-written book, highly recommend for any baseball fan--a side of the game most of us don't know much about. Performance was very slow, but solid.

I was given a free code via Audiobook Boom and have voluntarily left this review.

If you thought baseball players were skilled, here is an inside look at a form of International Baseball that will blow you away, and not just because it is unpaid! The author is sighted and an avid baseball fan but doesn't have a lot of skills to play. He covers the inception and development of the beep balls and the development of the game played by adults of a wide range of ages and nations as he himself tramped around the US following teams and interviewing players. For those of us who care to know, he does include the type and cause of each player's blindness and what he does for a living (we nurses are awfully nosy). This is a fantastic read even if you aren't into pro baseball, like me.
Doug McDonald is the narrator extraordinaire for this book.
I requested and received a free audio copy via AudioBookBOOM.

Wancczyk's tale gets to the meat of our strange and beautiful relationship with organized sport. This is less a book about disability and more one about people, the salt and other spices of the earth, grappling their way through great joy and heartbreak. The reader of this audiobook, Doug McDonald, carries the text elegantly and with a spirited tone when called for. His reading of all the unique characters is nuanced and brings the listener right into their world. Highly recommended.

I'm 50 (ugh lol) and have been a baseball fan since I was kid, and I've never heard of this! So cool that blind men CAN play baseball! Just goes to show ya, when you put your mind to something... :)

Very comprehensive look into the game and the players themselves. Fascinating, and I'm so glad these people are able to enjoy baseball just like anyone else.

Loved it!! It's a great listen, highly recommended for baseball fans. Inspirational!

I was given this free review copy audiobook at my request and have voluntarily left this review.
Please take a moment to click the "YES" ("Helpful") button below if you found this review helpful :) Thank you! :)