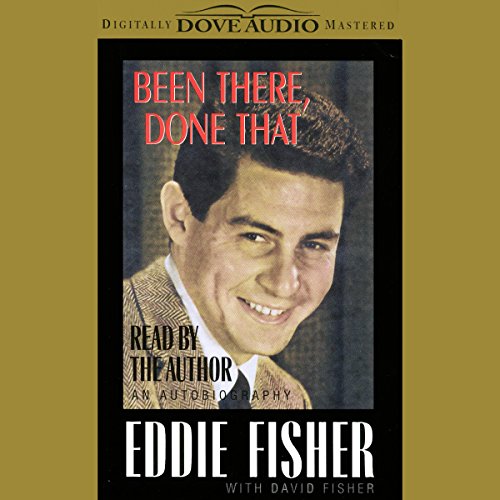 Been There, Done That

He was one of America's most popular entertainers by the time he was 21 years old. But for Eddie Fisher, that was only the beginning of a two-decade affair with fame and fortune that made him more famous than Frank Sinatra, turned out more consecutive hit records than the Beatles, and earned him millions of dollars. He married America's sweetheart, Debbie Reynolds, then left her for the world's most glamorous woman, Elizabeth Taylor. In between it all there were wild parties with Sinatra and the Rat Pack, and meeting's with Sam Giancana and the high-roller's life in Las Vegas.

With honesty and wit, Fisher re-creates one of America's most colorful eras, along with the roller-coaster ride that is his life.

What listeners say about Been There, Done That

It’s an interesting listen, but Eddie comes across as a phony when he speaks of love, which he clearly didn’t know much about. From his open abandonment of his kids, to his trash talking of Debbie (when she, at least, had the courtesy to speak sparingly, if at all, about him in her memoirs), Eddie’s actions speak for themselves. What a douche. RIP Eddie

What a selfish man.
I felt like this book was more of an account of the life of Elizabeth Taylor. I wonder if she wrote as much about him .

Whaaaaat did Eddie have?

He mentions bedding every Hollywood beauty from the60’s. Knew he was a speed addict. He names names and presents the good, bad and ugly about himself, but what is true?

i complete his sentences

I write about him in a present tense as if he is still in this world. He is the reader for his own book and tells you his life story with contemporary American jargon that you feel he is right there. It affirms the knowledge that his Neshama is very much alive.