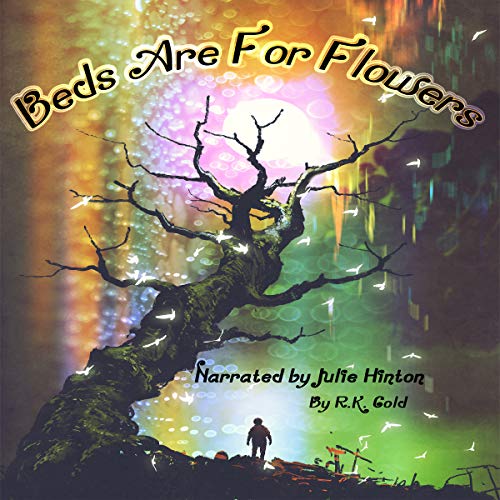 Beds Are for Flowers

Death was celebrated when the reapers and humans coexisted. Back when the monsters from around The End stayed in their small pocket of existence, only coming out in nightmares and darkness. Ganedyn was paradise and shared its life with its mortal counterpart. Reapers rewarded those at the end of their time on Earth by leading them through the tree in the in-between to an eternity of color, life, and freedom. In return, they would bring tokens back from Ganedyn. Acorns capable of sprouting into an entire forest and flowers capable of curing disease. Everything was in balance.

The Reaper in the Tree changed that. He saw humans as selfish creatures, more interested in the progress of their own comfort than the beauty of their gifts from paradise. They were handed something truly beautiful, truly colorful, and preferred to lay brick, pave roads, and live in gray; to them the bright colors of Ganedyn were nothing but a vacation. If it was gray they wanted, it was gray they would receive.

He blocked the passage to Ganedyn and turned the tree connecting the two realms into a throne. Those who wished to reach the other side had to walk around The End. Without the constant flow of life between the two worlds all color faded. Sickness ran rampant but death was less common. Even those who walked with a reaper around The End were not guaranteed safe travel. Without balance a sickly fear from the darkness found a larger opening to climb through into the mortal realm. The monsters from The End infested the world.

As his father prepares to walk around The End with the hopes of reaching Ganedyn, Clarence, along with his sister Jessi and his best friend Wakoba embark on a journey to the in-between to remove the Reaper in the Tree for good.

What listeners say about Beds Are for Flowers

It was a wonderful story I enjoyed following each character through out , great fantasy thank you RK Gold for the free code and the narrator did a great job

Summary: Clarence’s father is dying from some unknown illness. A Reaper comes by every day to see if he’s ready to travel the long road to Ganedyn, which I’m assuming is paradise. Many who travel the road don’t need it. While his mother’s willing to sacrifice years from her life, she doesn’t want the kids, Clarence and Jessi, doing the same. Desperate they resort to different tactics. Jessi sneaks next door and steals a bird from the Neighbor’s garden. That buys a little time. Clarence goes to speak to the neighbor and gets sent on a quest to dislodge the Reaper in the Tree, who’s presence there is pretty much the source of the problem.

Additional Comments:
- World-building (3/5) – A lot of imagination went into creating this bleak, colorless world. Much of the lore is explained fairly naturally, but the worlds don’t make much sense. There’s a normal, mortal world, a paradise, and The End. Part of what bothered me is the naming system or lack thereof. The Neighbor, the Red Reaper, The Reaper in the Tree, etc. I wish they had real names instead of titles. Caggers (sorry about spelling) are fears from one of the worlds creeping into the mortal realm.
- Characters (3.5/5) – Clarence, Wakoba, and Jessi are stereotypical questing kids. Clarence is the one given the quest. Jessi’s his sister, the brave one who carries a bat around. Wakoba’s the timid friend who has to face his fears to fulfill his part of the quest.
- Plot (3/5) – It follows a logical path, but I don’t get a good sense of the world space or time passing. Part of that might be that time in the dark place they travel to (forest?) and nearing the Pit gets skewed. The characters go from one conversation to another talking about what’s happening with little actually happening until the final confrontation.
- It’s 100% kid-friendly.
- Disclaimer – it’s probably more literature-based fantasy than I’m used to. There are probably deep roots of moral lessons in here about taking care of the Earth/world you have, one person making all the difference, and the power of kids. Guess I just look for more direct, sword or bow-wielding action in my fantasy. There are plenty of scythes about because of the Reapers, but there are too many restrictions on them to make for a good old-fashioned fight. (Can’t kill a reaper with his own weapon.)

Conclusion: Fans of RK Gold will probably enjoy this tale. Those who gravitate to Middle Grade literature too might find lots to love within. It reminds me of Treasure: Seed Savers by S. Smith. They’re both books about a world on the brink of collapse due to mismanagement of resources.

*I received a free copy of the audio from the author or narrator. I chose to leave a review. All thoughts are my own.

Hope there is a sequel

I loved this book. The characters R.K Gold crafted were complex year, so relatable and the fact that it was a fantasy with boys, girls, men, women, and imaginary creatures made identifying with them an easy thing to do .
The dialogue and writing were superb as well and I really enjoyed Julie Hinton’s’ perfo
rmance
Five stars all the way around and I will now wait for further adventures by Mr. Gold!

This was an interesting story. It is fantastical but somewhat thought provoking. It seems to try and make you consider your impact on the world. Both to the natural world and the metephoric. It had a very literary feel to it. The narration was pretty good as well. All in all, I think it is worth checking out.