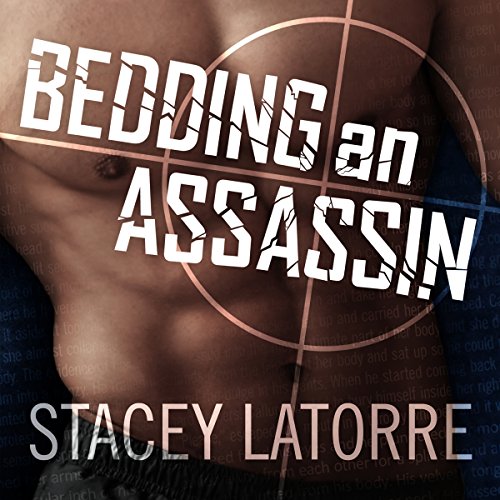 By: Stacey LaTorre
Narrated by: Anna Castiglioni
Free with a 30-day trial

He'd break anything that threatened me...even my heart.

When Jolene's life and the future of the vast Moroney inheritance became threatened by outside forces, there was only one man Jolene felt she could turn to.

Callum, an ex-assassin for the Scottish government, spent the last few years protecting Jolene's uncle. Now the chiseled bodyguard found himself on the run, going undercover to protect Jolene.

It started out as just another job for Callum. However, when the sexual tension between the two of them began to ignite, it threatened to set them ablaze. Acting on impulse, they gave in to their lust-filled desire and shared a sensual, passionate night together.

Instead of getting it out of their systems, it only increased their need for one another. Now, with unspeakable dangers closing in on them, will they be able to escape with their love...or their lives?

What listeners say about Bedding an Assassin

Jolene is pulled out of her ordinary life into mystery, danger, and romance. A fun Summer listen. Stacey LaTorre's prose style is engaging, and Anna Castiglioni's reading shows both real affection for the characters and excellent vocal range. I'd recommend it for any fan of romance with light mystery and action moving the story along.

This was a charmingly straightforward book with a beautiful setting and interesting characters. The reader really made the book come to life with a great variety of lovely accents!

What made the experience of listening to Bedding an Assassin the most enjoyable?

The experience from this book was made most enjoyable because of two specific reasons. The first was that although this was not the kind of book that I read normally I decided to take a chance because my best friend is the narrator. It was surprisingly good as it kept me interested through the whole of the tale. For a romance novel it had the action it needed and the suspense to keep reading.

What other book might you compare Bedding an Assassin to and why?

The only other book I can think of that is similar is moon gazer. Which is a modern romance action thriller.

I know the narrator very well and she brings the book to life with the sounds and power of the spoken word. She herself is a wonderful person and always has a great personality. I am very glad to be her friend and im glad to have read her narrated book. She definitely should continue in this reading.

What made the experience of listening to Bedding an Assassin the most enjoyable?

Bedding an Assassin is a fun, light chick-flick type novel, with equal portions of steamy romance and adrenaline surged suspense. The audio version has been artfully rendered by the ready. Her skillful narration brings additional life to each character.

Have you listened to any of Anna Castiglioni’s other performances before? How does this one compare?

The dead scene with a sad song.

Great story, Narrator Anna really makes it come to life. Takes you on a trip as if you are there !

Bedding an Assassin was a quick, light romantic suspense story. It was entertaining enough, but never gripped me completely.

Jo moves from the US to Ireland when she inherits a huge estate and business from an uncle she didn't know existed. Supported by her feisty best friend Charlotte, she takes over the estate and its staff, which includes a bodyguard her uncle had hired. There is an instant attraction between Jo and Callum, the bodyguard. But not everybody is happy with the uncle's will, and soon Jo's life is in danger, and Callum has to put his feelings aside to focus on protecting Jo's life.

Bedding an Assassin was a chic-lit fairy tale, enjoyable but not very deep with equal parts romance and suspense. The characters and the plot could have been better developed, for example, the way Jo's mother changed 360 degrees in no time at all did not make a lot of sense to me. There were a couple of nice twists and suspenseful moments though, and the romance, though high on the insta-love scale, was believable and charming.

The narration was also a bit of a mixed bag. Anna Castaglioni's pace was good, her male voices very convincing and her attempts at the variety of accents commendable. However, the book stated that Callum tried to hide his Scottish accent while living in Ireland. According to the audio, he failed miserably. That's not really a big deal and maybe I'm nitpicking, but Callum sounded so obviously Scottish, it didn't fit his character who was in hiding. I also found the female housekeeper's voice almost unbearable to listen to. It was far too high-pitched. The production had a couple of issues, too. There were several instances where sentences were repeated, and the sound effect used between chapters was louder than the narration, which didn't make for pleasant listening.

Yes, it was well spent.

I would have developed the characters more, given them more depth.

The story was fast paced but I didn't feel connected to any character.

Jolene and Charlotte had no trouble leaving their lives behind and starting a new life in a new country, there was no in depth discussion on the steps they were taking, no real reason for Charlotte to follow her friend . No thinking of the future, the family and friends leaving behind etc.

The instant love/lust was also instant and to me, unbelievable.


I liked her narration of the male characters: she portrayed Callum and Carrick in a believable way.

For the female characters, would have liked more distinction. It was hard at times to know if the narrator was Jolene or Charlotte ..

Bedding an Assassin is a light, easy, and enjoyable story to listen to. I was given this audio book to listen and give an honest review.