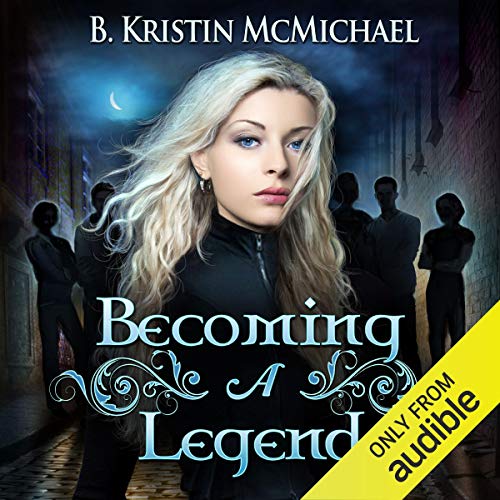 By: B. Kristin McMichael
Narrated by: Caprisha Page
Try for $0.00

Book 2 of the Blue Eyes Trilogy.

Arianna Grace is about to turn 17, and her life has been very complicated lately. She is the leader of four clans of night humans: dearg-dul, baku, tengu, and lycan. While the four clans seem to get along better with one another, there is internal conflict on both sides of her family, not to mention the three boys vying for her attention. Devin is set on keeping her safe above all else. Turner's goal is to make her happy. And Andrew wants her for himself. At some point Arianna will have to choose between them, but first she needs to survive the plots against her.

Edward Lucan is making a chase for the power to lead the baku clans and is playing his cards by using his nephew Andrew to lure Arianna into a trap. Unfortunately for Lucan, Andrew has his own plans. He has spent the last year waiting for Arianna to see him as more than a friend, and he now finds it necessary to make a move for her affection, despite his uncle.

In the dearg-dul estate, Arianna discovers that the ambitious Lord Seeger has been laying his own strategies for power and is slowly poisoning her. After getting away with her grandfather's murder, he is setting his sights on her. Luckily for Arianna, her team is on to all of the plans and is making their own counter strategies. Will it be enough to keep Arianna safe? Several people close to Arianna have been keeping secrets. If Arianna is to take power and control of the night, she will need to know the truth. Will someone finally tell her what it really means to become the legend everyone is waiting for, before it is too late to turn back?

What listeners say about Becoming a Legend

Kept me wanting more and more! I can't wait to start the next one. Love her series

Love this book. getting ready to listen to the next book now can't wait love

I love this series...need book 3 NOW!

I love this series and my heart is breaking, both for the characters and for myself, because I have to wait a couple days to start book 3!

All three main characters grew a lot throughout this book. Their strength, powers, and maturity, especially Arianna. I can't wait to hear/read what happens next!

getting the last one and can't wait to start it. very good story and series

The story continues, with a well developed plot and unforgettable characters. Their world is painted in your mind with words, and the story keeps you guessing. It is a wonderful book.

I absolutely adore this series! I put off reading it and finally said screw it, it's time and I'm so glad I did. I cannot wait to see what more Ari (not sure if that's how we are spelling her condensed name) does in the next book!!

This seconds book in the trilogy continues to show growth for the characters, plot, and the improving skills of the author. This is an enjoyable book that is a nice casual read. Hopefully we will continue to see more of this in the third book.

I really enjoyed the series. it would be nice though if the girl would stand up for her self a little bit more that kind of thing got on my nerves. My other is that the not a lot really happen in this second installment, but I can't wait to finish up the trilogy and see how it ends.

Loved it. The story was captivating.

I really enjoyed this book. Each character was unique. I can't wait to see how the series ends.

Great second book in the series

Why does every YA series have to have a love triangle? It is like a prerequisite for the genre, teenage girls must be fraught with the decision to choose between two boys. Sigh. Alright, rant over.

Ari is getting more into her world, although a year after the last book left off she seems just as in the dark as before. I get annoyed because somethings are really clear and she doesn't pick up on them. Thankfully this book starts to give us more detail and gets more into the legend. So much world building is going into things it almost makes the head spin. There is a lot of information to absorb.

The narrative is still mostly Ari, with a few stray thoughts of others thrown in. This is still a bit jarring, it takes you out of the moment to have somebody else's POV popped in for just a sentence of two. I need more stability than that in my narrative. Still not enough to put me off reading, just a minor annoyance.

The whole love triangle is typical of this genre, although it feels like it might take an unexpected turn later on in the series. I am really enjoying her choice in Keepers and was thrilled about her Dearg-dul pick. Exactly what I felt it should have been!!

I listened to the audiobook narrated by Caprisha Page, who rocks!! I love her choices in the voices for the guys. She makes some very smart decisions with accent and tone to keep them distinct. She has a very swift pace, I almost didn't need to speed it up for listening. Her energy really feeds into the movement of the story and keeps it popping! I am a huge fan of her read for this series! She is definitely well suited to YA reads!

The book leaves of not so much at a cliffhanger but not a real ending. As I suspected the trilogy relies heavily on the books being read in succession. It is an engaging read and I am really hoping everything will be revealed in the third book. Ari is just starting to come in to her true power and gain confidence in that strength. I can not wait to see her after a bit of training taking on all challenges.

My opinion on the Blue eye trilogy

i love the blue eye trilogy and this book reminded me of my love for it. i cannot wait to read the next one. Great story line. This trilogy is one of my fav book seris!