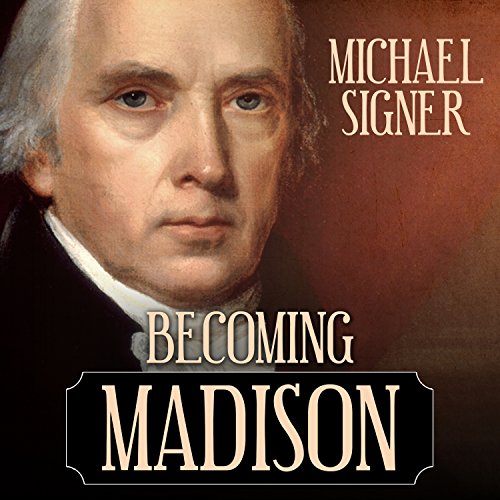 In Becoming Madison Michael Signer takes a fresh look at the life of our fourth president. His focus is on Madison before he turned 36, the years in which he did his most enduring work: battling with Patrick Henry - the most charismatic politician in revolutionary America, whose political philosophy and ruthless tactics eerily foreshadowed those of today's Tea Party - over religious freedom; introducing his framework for a strong central government; becoming the intellectual godfather of the Constitution; and providing a crucial role at Virginia's convention to ratify the Constitution in 1788, when the nation's future hung in the balance.

Signer's young James Madison is a role model for leaders today: a man who overcame daunting personal issues (including crippling anxiety attacks) to battle an entrenched and vicious status quo. His analysis of "Madison's Method", the means by which Madison systematically destroyed dangerous ideas and left in their stead an enduring and positive vision for the United States, is wholly original and uniquely relevant today.

"A perfect introduction to a deeply private and immensely important man." ( Kirkus)

I love history and have begun my historical journey by reading the biographies of the presidents and important political players during the formation of our democratic republic.
The author's interesting narrative and detailed research helps us to understand how Madison channeled his genius into a method that gave us the Constitution and Bill of Rights. Although he suffered with anxiety & other health issues, he managed to live to a good old age of 85!
The narrator did a good job but lacked the dramatic voice at certain segments.