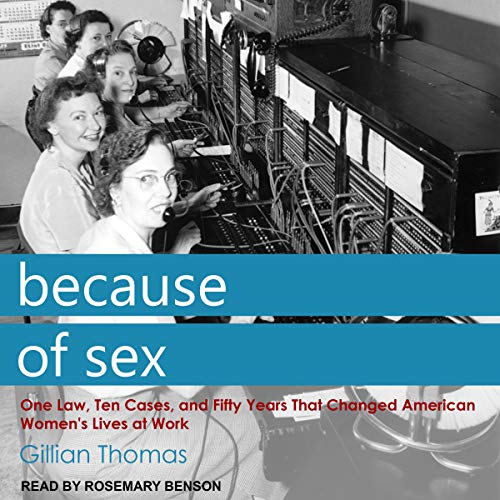 By: Gillian Thomas
Narrated by: Rosemary Benson
Try for $0.00

Best known as a monumental achievement of the civil rights movement, the 1964 Civil Rights Act also revolutionized the lives of America's working women. Title VII of the law made it illegal to discriminate "because of sex". But that simple phrase didn't mean much until ordinary women began using the law to get justice on the job - and some took their fights all the way to the Supreme Court. Among them were Ida Phillips, denied an assembly line job because she had a preschool-age child; Kim Rawlinson, who fought to become a prison guard - a "man's job"; Mechelle Vinson, who brought a lawsuit for sexual abuse before "sexual harassment" even had a name; and most recently, Peggy Young, UPS truck driver, forced to take an unpaid leave while pregnant because she asked for a temporary reprieve from heavy lifting.

These unsung heroines' victories, and those of the other women profiled in Gillian Thomas' Because of Sex, dismantled a Mad Men world where women could only hope to play supporting roles; where sexual harassment was "just the way things are"; and where pregnancy meant getting a pink slip.

Through first-person accounts and vivid narrative, Because of Sex tells the story of how one law, our highest court, and a few tenacious women changed the American workplace forever.

What listeners say about Because of Sex

I know these laws and this history well, and this seemed like a kind of shallow analysis. It felt like feel-good feminism. It's fine if you want a broad overview of women's rights-- it's not inaccurate, it's just non-critical.