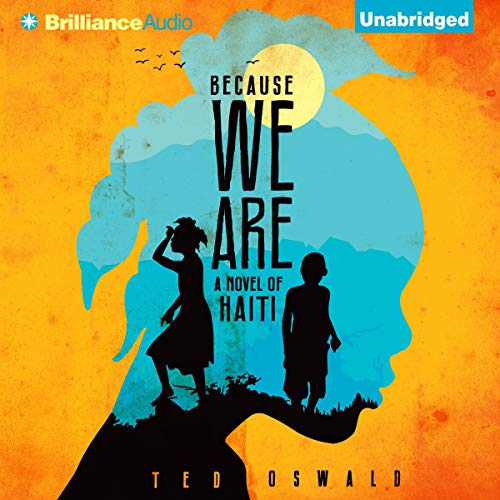 By: Ted Oswald
Narrated by: Bahni Turpin
Try for $0.00

Ten-year-old orphan Libète has been hardened by the daily struggle to survive in Cité Soleil, Haiti's most infamous slum. But when she and her best friend, Jak, discover a young mother and her baby brutally murdered in a nearby marsh, it's unlike anything she's encountered before. Though initially shocked, the adults of Cité Soleil move on quickly from the event; after all, death is commonplace in this community. Undaunted, Libète takes action with Jak in tow, plunging herself into a dangerous, far-reaching plot that will change her irrevocably and threaten everything she holds dear.

Because We Are is a profound and mesmerizing tale of a young girl's search for justice in an unjust world, set against the vivid and tumultuous backdrop of modern-day Haiti.

What listeners say about Because We Are

I profoundly enjoyed this book and performance. This one will stick with me for a while. I was afraid this would be too much of a 'Young Adult' title, but it's definitely for mature readers.
A few plot elements were predictable, but that was a very minor blemish on an otherwise fantastic piece of work.

This audiobook was such a gem in every way. Not a mystery--multiple mysteries. Characters that touch your heart and raise you up. The narration was perfect and so lovingly done. Also yet another example of how unnecessary foul language is to a gripping story. I wish I had 10 more audiobooks like this one.

It was an exciting well told story. I fell in love with the characters. The story touched on so many problems facing impoverished people.

What a great surprise!

This is a richly complex story with characters who bring the glue to hold you spellbound. Fantastic narration. I was pleasantly surprised and did not want it to end! MORE from this writer!

over all it was good, it was very hard to follow l, due to jumping all over with the story. Frustrating at moments, because you could not understand what was going on between chapters. It was a really good and glad I finished, just could of been wrote less confusing.
the narrator was awesome and great choice for the book.

I bought this book on sale & I didn't know what to expect. It's different from the usual genre I read.
I enjoyed this book but at first I was confused because it jumps from present to past. I just wanted to hug Liberté & give her a hug. I'm sure the characters are all fictional. This book opened my eyes to the trouble in Haiti.

I could not stop listening. Liberty is muy little hero. The book was well written. I want more from this writer.
I also love the narrator she gave the story life.

Poetic. Heartbreaking. Uplifting...the list could go on forever. Highly recommended for anyone to read. Yes, it's a work of fiction but so much of that lines up with what happened after that earthquake.

The first half it can draw out a bit but reading the whole book is so worth it it's become one of my favourite books this year.

I was very moved by a story set in a country I am not familiar with. The struggles described are foriegn and terrible. It reminded me to look deeper at a situation and not listen to a convenient explanation.

I enjoyed the story, the characters, the voice changes, everything about the book, highly recommend ❤️