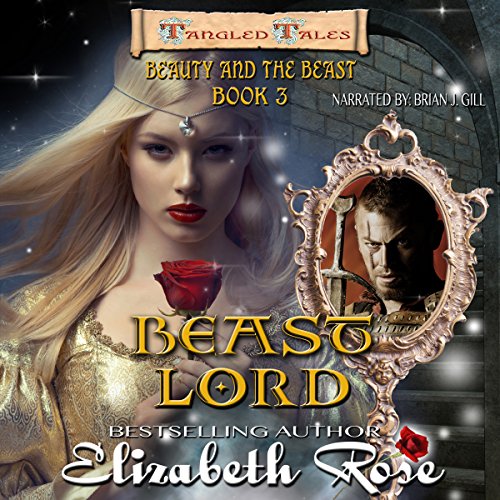 Beast Lord: Beauty and the Beast

Book three: a twisted, tangled, romantic retelling of the fairy tale Beauty and the Beast.

The curse of the de Bar siblings continues as Stefan de Bar, eldest of the seven, takes a small group of his brother's soldiers and goes on a search for his missing sister, Rapunzel. The witch, Hecuba, has stolen his sister and they have been spotted near Breckenridge Castle. Stefan's cautious nature and hesitance to make a decision is the cause of what turns into a deadly ambush. Bloodied and bruised, Stefan manages to take the castle, but in the process suffers severe damage to his face. He finds and confronts the witch, but this time she curses him, and it is possibly worse than the curses she's previously bestowed upon his twin brothers. He needs to love a woman and be loved in return before the last petal falls from a rose, or the beast that is emerging within him will consume him forever.

Bonnibel of Breckenridge returns home after 15 years to marry a man of her father's choosing that she's never even met. But when she gets to Breckenridge Castle, her father is missing, most his men are dead, and a beastly man named Sir Stefan de Bar has claimed the castle as his own. Thinking she'll gain his favors, she stitches up his face, but the man's anger is out of control and it causes his body to start to change into that of a beast. While all she wants to do is run, something deep in Stefan's eyes makes her want to stay. However, she has no choice when Stefan takes her as his prisoner.

Can Bonnibel not only find her father and a way to escape, but look past Stefan's outward appearance and learn to love the real man deep inside before it's too late? And will Stefan realize that love can't be forced but has to be earned and given freely from the heart? A battle of good and evil grows within a man who wants nothing more than to love a beautiful young maiden and be loved in return...before the last petal falls.

What listeners say about Beast Lord: Beauty and the Beast

Keeps you on the edge of your seat.

This is one of my favorite stories in the Tangled Tales Series. Great play and tension between the hero and heroine. Author Elizabeth Rose has a magical imagination and pens a fun romance. I truly enjoyed the playful banter between Stephen and his squire. He’s the funniest, most unprofessional squire ever. You cannot help but love him and laugh at him. I also enjoyed the relationship and playfulness between the brothers, great teasing as brothers will do. All of this combined with a blooming romance made this book great fun.
I highly recommend it.
Narrator Brian J Gill did a nice job narrating.

I didn't care for this story very much. An ugly appearance doesn't account for the massive shift in Stefan's personality from the previous books - all of a sudden he's a mean guy who goes and claims the first castle he sees for himself. The relationship between him and Bonnibel felt too forced.

i really enjoyed this story!! This is a wonderful series!! . I can not wait to listen to the next book!!!

Most definitely a twisted tale

A really unusual approach to the Beast and the castle staff made this a good story. I must say though that a couple of the brothers I really liked in previous stories I wanted to smack... MANY times!

definitely 10 Stars if I could

An amazing love story as old as time woven into a new and better creation.
Elizabeth Rose is a brilliant story teller who will take your breath away with her new take on it! Bravo Elizabeth Rose 🌹

Beauty and the Beast has always been my favorite fairy tale and Elizabeth Rose has done a wonderful job twisting the tale into a wonderful story. Brian J Gill is, as always, a marvelous narrator. He brings the story to life with his emotional reading. You feel like you know each character in person.

Beauty and the Beast Love Story.

A beast to feel sorry for and love. An old story told with a new way. I loved the story.

Beast Lord: Beauty and the Beast

I really enjoyed listening to Elizabeth Rose's version of Beauty & The Beast and Brian J Gill did a very good job of making the story come to life. This was the first book I have listened to in this series. It was a magical fairytale with a twist. I cannot wait to read or listen to the rest of the series. I highly recommend all of Elizabeth Rose's books or audiobooks.

Another amazing book by Elizabeth Rose.
I loved this Beauty and the Beast retelling. I enjoyed the chemistry between Sir Stefan and Lady Bonnibell.

This is the 3rd book in this series, and it's my favorite so far!!

I LOVE Beauty and the Beast, and this retelling is perfect!

Will the curses of the deBar family ever be broken??

I didn't care for this story as much as the other 2 it was still an enjoyable read but I couldn’t connect with Stefan, An ugly appearance doesn't account for the massive shift in Stefan's personality from the previous books - all of a sudden he's a mean guy who goes and claims the first castle he sees for himself. This is a good book but stefan’s personality change was a bit annoying

I love Elizabeth's way of rethinking the Fairytales and that love can overcome everything else.