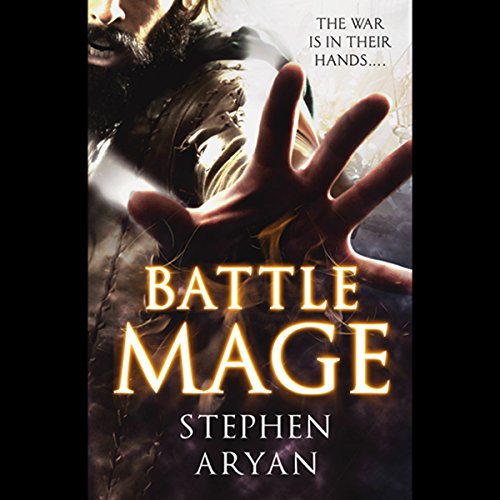 By: Stephen Aryan
Narrated by: Matt Addis
Try for $0.00

"I can command storms, summon fire and unmake stone," Balfruss growled. "It's dangerous to meddle with things you don't understand."

Balfruss is a battlemage, sworn to fight and die for a country that fears and despises his kind.

Vargus is a common soldier - while mages shoot lightning from the walls of the city, he's down in the front lines getting blood on his blade.

Talandra is a princess and spymaster, but the war may force her to risk everything and make the greatest sacrifice of all.

Magic and mayhem collide in this explosive epic fantasy from a major new talent.

What listeners say about Battlemage

I really enjoyed this audio book! I do have to add in my two cents about a few misleading reviews. I noticed that a lot of reviews are saying that this is like Game of Thrones and so on....The only thing this story and GOT have in common are British voices and swords. However, if one is familiar with the lore from Bioware's Dragon Age, then you will notice a lot of similarities with the mention of fear of mages, the maker, the veil and more...this just has a lot more gore :).

What made the experience of listening to Battlemage the most enjoyable?

Matt Addis's performance is what made this book enjoyable.

Would you recommend Battlemage to your friends? Why or why not?

That should say it all

Have you listened to any of Matt Addis’s other performances before? How does this one compare?

There are a lot of moments that made really feel apart of the world. Anytime Vargus talked about brotherhood I felt like I was there apart of something bigger

My problem with this book is how much of a downer it ends on. If your a fan of game of thrones this will be right up your ally.

This is suppose to be the first part of a trilogy but having read the description of the next and knowing I will be dealing with new characters with new issues I just don't know why I should care.

The books greatest weakness is the fair number of segments that could have been cutout. They makes the book feel longer than it is and more than once I checked to see how much time was left. Sadly most of the are Talandra POV so at first I thought I just didn't like Talandra herself.

I really don't know what to make of this book but again I say if you like game of thrones and want something like that but with more magic then this would be a good choice.

I feel like this book bounced around a whole lot, and wasn’t clear when on when it changed characters.. Wish I hadn’t have wasted my time and money on this book, based on this one I will not be buying any more of Stephen Aryan stuff.

This idea of this story was interesting, covering the viewpoints of several people amidst a raging war. It was a change to listen to a story that was all about a war and how the characters handle the differently situations they are put up against.

POSSIBLE SPOILERS
It was a bit much to deal with not only 3 main characters, but several side characters as well. Upon listening, I recall meeting at least over 10 different characters and experience the world in their perspectives. It was difficult to keep track of who was who, and the story often times jumped from one character to the next in the same chapter.
Magic in this world is interesting; a battlemage possess the ability to access the energy that ties all things together, and shape that energy into whatever they can imagine. Yes, it is stated that mages have a limit of this energy they can access before it kills them, but honestly, that limit didn't seem very limited at all. The battlemages were extremely powerful, and it's no wonder that the immortals fear that the mages would claim themselves as gods. It seemed extremely easy for a mage to go beyond their limits and survive. Limits are suppose to be in place to prevent someone from becoming godly, but that didn't seem like a thing.
This book was also in an section for supporting LGBTQIA+, a couple characters give the idea they are gay, but turns out only one is, and it's the princess. And even then, she can't be with the one she loves? She had to cast her lover aside, for viable reasons, but it just felt like the writer didn't want to show actual gay lovers. He would rather talk about tits and men laying with women.

In the end, the story was flooded with characters and useless information. The ending felt rushed, though left open, there isn't really much else to deal with when the evil, crazy, emporer is dead.

I love magic and battles, but I expected more. And would like to read more about gay relationships that are allowed to happen, instead of just being cast aside, like in almost every book I've read that claimed to support the LGBT.

Loved it. And I finish in a place where it can be a one off or series.

I had a hard time with the transition from one group to another. Several times it happened so fast I didn't realize he was talking about someone else for a minute and has to back track to figure out what just happened. Then realized I was confused due to the fact that he had switched to talking about a different group of characters.

Story line good, story too slow. Performance was nice, characters made to come to life, once again, too slow.

This book was a pleasant surprise. The author did an outstanding job of creating interesting and fully fleshed out protagonists, and placed them into a well thought out conflict. The performance was well done but not acted out, and refreshingly free of mispronounced words.

This was a great audiobook. The narrator did a great job! Story line was well written by the author.

Awesome book! Would have made an amazing trilogy.

Great listen! Matt Addis performs masterfully. Stephen Aryan paints the story so vividly you can see it easily in your mind. The only thing that could have made this story better was if it had been in three parts. I want more!