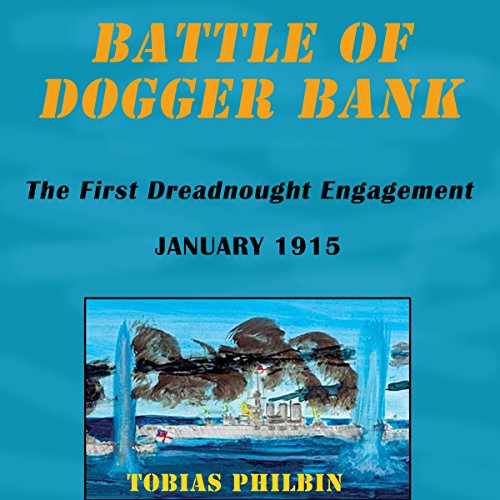 On January 24, 1915, a German naval force commanded by Admiral Franz von Hipper conducted a raid on British fishing fleets in the area of the Dogger Banks. The force was engaged by a British force, which had been alerted by a decoded radio intercept. The ensuing battle would prove to be the largest and longest surface engagement until the Battle of Jutland the following summer. While the Germans lost an armored cruiser with heavy loss of life and Hipper's flagship was almost sunk, confusion in executing orders allowed the Germans to escape. The British considered the battle a victory; but the Germans had learned important lessons and they would be better prepared for the next encounter with the British fleet at Jutand. Tobias Philbin's Battle of Dogger Bank provides a keen analytical description of the battle and its place in the naval history of World War I.

What listeners say about Battle of Dogger Bank

In dept coverage of Dogger Bank

This book really illustrates how the Grand Fleet and High Seas Fleet admiralties influences and sometimes hindered their capabilities with their inexperience and political maneuverings.

It also shows how badly the British misread the German disposition on the home front in regards to surface ship priorities.

You get a nicely detailed order of battle and battle coverage.

I would say that for the most part I agree with the conclusions Philbin offers at the end. Doggerbank was important in a sense that it shaped future capital ship engagements and laid the ground work for Jutland.

100% recommend if you’re a naval geek. First class work was done in the research and writing of this work.

I was very interested in this important piece of history but I found the large amount of detail hard to follow in audio format without reference information.
It was very well researched. I learned a lot from it and it did not contradict the small amount of knowledge I had on the subject.
I recommend reading rather than listening . This is not meant to be a criticism of the narration but rather the method of transmission.

What did you love best about Battle of Dogger Bank?

Besides Claton Butcher's narration, I liked learning about the Battle that occured just prior to the first world war.

I thought it was interesting learning about all the original battlecruisers that were being built and used and also the lines of the British Fleet. And learning about the first German U-boat. It was a part of history that was necessary to move the world forward.

Claton Butcher did a wonderful job narrating this audiobook. He speaks very clearly and is easy to understand and follow. His german is perfect as well. He has great control and perfect pauses.

I received this audiobook foc in exchange for an unbiased review.

Would you try another book from Tobias Philbin and Tobias R. Philbin and/or Claton Butcher?

No, not based on this book

Has Battle of Dogger Bank turned you off from other books in this genre?

No. I found it by searching for historical fiction, but in my opinion it is all facts and no fiction.

What character would you cut from Battle of Dogger Bank?

Listening to this on the highway was like watching paint dry. Boring, boring.

Overall impression was disappointing, a dispassionate review of the events surrounding the actions of the antagonists' naval and political personnel and the relative merits of the vessels involved was quite detailed and accurate. The book was marred to an extent by the narration, a marked American accent and atrocious pronunciation of locations in England and of German names would have been minimised had the narrator done a little homework first. The book does not do justice to the tragic events of this battle of the two sea powers of the time nor does it condemn in sufficient depth the tragic loss of life of many brave but helpless seamen.