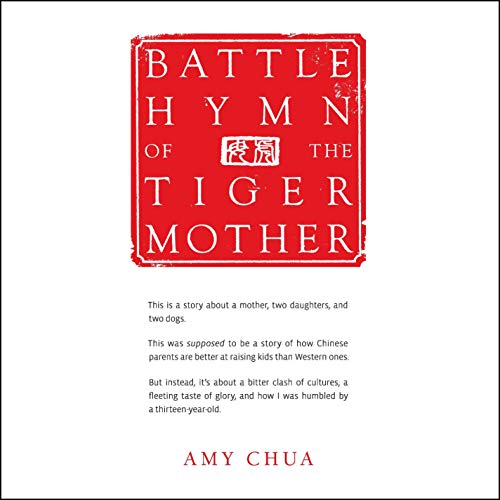 Battle Hymn of the Tiger Mother

An awe-inspiring, often hilarious, and unerringly honest story of one mother's exercise in extreme parenting, revealing the rewards - and the costs - of raising her children the Chinese way.

All decent parents want to do what's best for their children. What Battle Hymn of the Tiger Mother reveals is that the Chinese just have a totally different idea of how to do that. Western parents try to respect their children's individuality, encouraging them to pursue their true passions and providing a nurturing environment. The Chinese believe that the best way to protect your children is by preparing them for the future and arming them with skills, strong work habits, and inner confidence. Battle Hymn of the Tiger Mother chronicles Chua's iron-willed decision to raise her daughters, Sophia and Lulu, her way - the Chinese way - and the remarkable results her choice inspires.

The truth is Lulu and Sophia would never have had time for a playdate. They were too busy practicing their instruments (two to three hours a day and double sessions on the weekend) and perfecting their Mandarin. Of course no one is perfect, including Chua herself. Witness this scene: "According to Sophia, here are three things I actually said to her at the piano as I supervised her practicing: 1. Oh my God, you're just getting worse and worse. 2. I'm going to count to three, then I want musicality. 3. If the next time's not PERFECT, I'm going to take all your stuffed animals and burn them!"

But Chua demands as much of herself as she does of her daughters. And in her sacrifices - the exacting attention spent studying her daughters' performances, the office hours lost shuttling the girls to lessons - the depth of her love for her children becomes clear.

Battle Hymn of the Tiger Mother is an eye-opening exploration of the differences in Eastern and Western parenting - and the lessons parents and children everywhere teach one another.

"Battle Hymn of the Tiger Mother is the book we've all been waiting for - a candid, provocative, poignant and vicarious journey through the Chinese- American family culture. It will leave you breathless with its bluntness and emotion. Amy Chua is a Tiger Mother, a greatly gifted law professor and, ultimately, an honest, loving woman with a lot to say." (Tom Brokaw)

"This is one outrageous book, partly thanks to Amy Chua's writing style - Chua is pugnacious and blunt, with an unerring nose for the absurd... The cultural divide Chua so brilliantly captures is one we stand to witness more and more in our globalized age, after all; and what with Asia and Asian achievement looming ever larger in the American imagination, the issues inherent in Battle Hymn are as important as they are entertaining... I was riveted by this book" (Gish Jen, The Boston Globe)

"Amy Chua's Battle Hymn of the Tiger Mother did more than speak to me. It screamed, shouted and lectured me. It made me simultaneously laugh with empathy and cringe with embarrassment and exasperation... Charming... Self-effacing... Guffaw-inducing" (Terry Hong, San Francisco Chronicle)

What listeners say about Battle Hymn of the Tiger Mother

Provocative for all parents

Definitely worth a listen for anyone who is a parent (or considering such). Ms. Chua raises important questions about how hard to push as a parent and the natural conflict between wanting to create a "perfect" child and wanting to have an easy, loving relationship with your child. The book also helps to humanize Ms. Chua a bit -- the Wall Street Journal excerpt focused on all the extremes in the book.

--Last chapter could have used more reflection by Ms. Chua. Would she have done anything differently if she could and why? What else did she learn from her parenting experience?

--Book needed a good editor to delete numerous trite phrases like "sharp as a tack." A Yale law prof can be more thoughtful about word choice (or getting an editor).

As an Asian American, I read my share of Tiger Mother articles debating the merits of Amy Chua’s tough love, but for-the-best-of-her-children approach to parenting. And while many of these articles depicted Chua as a relentless dragon lady-type mom, none of them prepared me for some of the touching stories she actually had to tell in Battle Hymn of the Tiger Mother.

Now don’t get me wrong – Chua did force her daughters to practice the violin, for hours, on family vacations – but she also confesses to feelings of loss and doubt when she’s just not sure if she’s doing the right thing, the best thing for her daughters.

In the end, whether you agree with her or not, you’re sure to take away some helpful insights about seeing and bringing out the best in your son or daughter. And if Chua’s assured first-time narration is any indicator, the hard work may just pay off after all.

Best: Gaining understanding of a different parenting style. Very interesting.Least: Repetitive stories of battles with daughters. Once or twice would have been enough.

Has Battle Hymn of the Tiger Mother turned you off from other books in this genre?

Not a scene, but the idea that pushing kids expresses a high regard for their potential.

it's more than the hype

After listening to this audiobook, I was really surprised how much I loved Amy Chua's family story. I had heard some of the reviews on my local news program and my interest was piqued.

Amy was not especially saying her way was better or what she did was right. She was saying that she did it her way and there were both positive and negative effects to her methods. She admitted her mistakes and apparently has learned from them. It's realistic. It's loving. I wish I had someone like Amy to push me forward like her kids. Who knows? I might be in a better place today.

Amy reads her book well and is captivating.

The Memoirs of a Self-Enthralled Person

I cannot imagine who would enjoy this read. The author/narrator was so full of her own accomplishments, no matter how unappreciated they were, that it was like reading a dictionary!

I was reminded of the journals of the Lewis & Clarke expeditions which painstakingly listed all the supplies loaded, etc.

Ms. Chua starts each day at 3am, runs with the dogs, teaches, writes, harangues her daughters, alienates her neighbors, etc. Ad nauseum!

There were a few funny stories, and a few touching stories.

I don't have what it takes to be a tiger mom

Whether you agree or disagree with her views/actions on how to educate children, I find the book very entertaining. It has not only stirred up a lot of discussions, it has certainly made me reflect on what my belief is and what my husband thinks about this topic since we don't have kids yet. I truly respect Amy Chua as a mother even though I don't think I can do what she's done to/for her kids. I don't think I have what it takes to be a tiger mom, but on the other hand, it may really take that much of discipline to train and refine one's skill in music or a lot of other fields. At the end of the day, not all of us is music prodigy.


In short, if you don't start the book judgmental, it's a well-written, well-narrated book that shows a very interesting/different perspective on culture and child's education.

Battle Hymn of Get Some Prozac...

The one where the Mom hurled abuse at her recalcitrant daughter...oh, wait, that was the ENTIRE book.

Heck no! I already lived this once, I don't need to revisit my childhood on film.

Wow. The Mom needed to seriously chill and get her own hobby. There's disciplining your child and pushing them to do their best, but this Mother needed to get a grip. She could have approached motherhood with a little more balance.

Someone who wants to emulate the stereotypical Asian mother.

I wasn't find of the performance, but I think it was the content that just turned me off.

Sure glad she wasn't my mother! It helped me understand the chinese mother but at time I felt suffocated by her.

Amy is this really you?

Balance is the Key to Great Parenting

If you could sum up Battle Hymn of the Tiger Mother in three words, what would they be?

I appreciate that the parents did care about giving a Music Education to their two young girls. I am a seasoned, 40 years as a private piano teacher so I have dealt with and continue to deal with all types of parents; great to horrible.

When Chua, the author was dealing with her defiant 5 year old and made her go outside to a freezing porch in the middle of the winter in Boston. This experience solidified was a mean, narcassistic mother Mrs. Chua was. If I had been the teacher, I would have social services and had both girls removed from the home.

When parents abuse their kids in order to vacariously force them to have what they did not have as children, sometimes parents loose their ability to make clear judgement calls; their egos as parents are totally out of line - regardless of culture.

Children need to laugh, play and be children. Some light exposure to the arts is fine but there needs to be a balance when parents can coddle the talent along in an effective manner without being abusive and condescending.

Otherwise, as is with the case of so many children, they will end up either committing suicide as they get older and or being in long term therapy with counselors trying to deal with their outrage and anger.


Did you have an extreme reaction to this book? Did it make you laugh or cry?

I went on line and pulled up this book an Amazon.com

Here is what I found;


I guess Mrs. Chua intention to make a fortune of her kids misfortuned bombed royally even with TV and Radio interviews.

Karma as an awful bite at times....