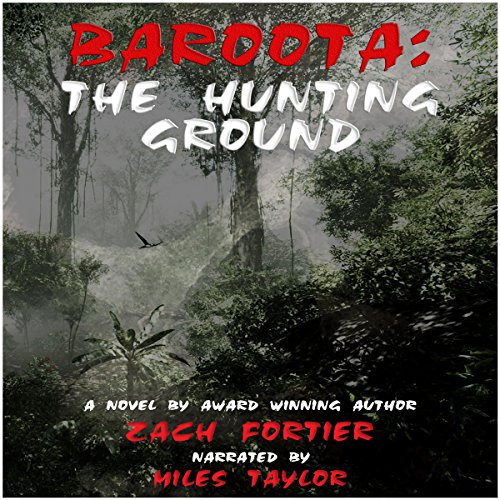 By: Zach Fortier
Narrated by: Miles Taylor
Try for $0.00

Baroota is a fictional tale of Nick Hudson, an aging, retired cop attempting to get in one last mission to make a difference. He gets sucked into an off-the-books black ops mission to rescue victims of human trafficking being sold into sexual slavery.

He meets Nõnkos Zia or Nõn, a woman born in South Africa and a former victim of Muti-medicine - a type of medicine still practiced in South Africa that weaves the occult and human sacrifices into the locals belief system. She is also a victim of human trafficking, from which she barely escaped after taking revenge on her captors.

They are outsiders in a dark twisted tale of deceit, lies, and double crosses that take them to the Darien Gap in Panama, one of the most remote areas in the world, to hunt human traffickers.

What listeners say about Baroota

Overall,Baroota is a pretty fun journey

Overall, I enjoyed the book. It was paced well. Unlike many books, their was never a time when I felt like I had to slog through meaningless/boring filler. The author did a nice job explaining the main character as you go through the story. I would recommend it to most friends. If they had a strong aversion to violence and some "gutter talk", I would not advise it.

What was one of the most memorable moments of Baroota?

Nick's surprise meeting with the military boys was one of several good scenes.

When Non recounts her life as a youth

A few spots the book wasn't quite as "tight" as I would have preferred. I believe if the book would have been a little bit longer that it would have been able to flow a bit smoother at a couple of areas. However, it was an overall entertaining audio book.
I received this audio book at no charge in exchange for a free review.

Starts off with a great premise. Off the books black ops team to go after sex traffickers...from there the plot twists in a crazy direction that couldn't be predicted. At that point you take a rollercoaster ride of action that will leave you on the edge of your seat. Listened
Optimal at 1.25. I received this audiobook from the author narrator or publisher for free via audiobookblast in exchange for an unbiased review

I really enjoyed it. This book was full of drama and suspense with plenty of twists and turns until the very end. There is graphic violence so be prepared! The narration was great and kept me entertained. The author did a great job with the character builds and plot. This was my first book by this author but definitely not my last! I look forward to reading the next book in this series! I was given this free review copy audiobook at my request and have voluntarily left this review.

The narrator's voice was clear and the audio had no glitches. Very enjoyable listen. I would recommend this audio because the story had great action.

If you could sum up Baroota in three words, what would they be?

Which character – as performed by Miles Taylor – was your favorite?

Miles Taylor did a really good job with the narration. Different voices, accents, emotions, clear pronunciation and a smooth even pace

Our hero is Nick, a smart-mouthed cocky former cop and ex-marine who is retired, but itching to get back into some kind of action. I wish we had gotten a little more back story on Nick. I think the story would have been enriched if we knew some more about this self-proclaimed a$$-hole who has a personal vendetta against the men who perpetuate human trafficking. On a seemingly serendipitous occasion, an acquaintance offers him a chance for second glory...on a top secret, under-the-radar mission to extract the victims of human sex trafficking and eliminate their captives. His personal vendetta won't allow him to refuse, so he signs up, even though he feels that something isn't quite right with the whole thing. We then meet Nõnkos (Nõn); a former victim of human trafficking who has escaped and made a life as a freelance reporter. She also joins the mission, under the impression that she is to document everything to create awareness among the public about the worldwide human trafficking problem. They soon both discover that the whole mission was a guise for something else...something sinister that thrusts them into a remote area of Panama where they must fight for their lives. The book is short because the author wastes no space on fluff. In a way I wish he had taken a little more time for character development, but I still certainly enjoyed the story. The narration was good...especially foreign accents. Spot on in my opinion, and really brought the story to life.

I received this book at no charge via AudioBookBoom in exchange for my honest review.

Much better than I expected. Looking forward to more. I received this audiobook for free through Audiobook Boom for my unbiased review.

Review without any spoilers.

While not an original plot line for a story, the details of the who and why are different enough to make this a really good well written story. It takes a few chapters for the story to get going, but when it does it's full of action and suspense. Even though this is a short book it did not feel like it. The story moves forward at an even pace giving it plenty of time for the story to unfold and all the action to take place without feeling rushed or like something is missing. A bonus for me with this story setting is that I had a clear picture in my mind of what the area and their surroundings looked like since I lived in Panama for a few years.

Is there violence - yes, it's a thriller. So if you don't like violence or crude language this might not be your cup of tea.

Nick was a great character, really liked his twisted sense of humor. Non was also great, it was nice to have a strong, intelligent female character.

Miles Taylor did a really good job with the narration. Different voices, accents, emotions, clear pronunciation and a smooth even pace.

This audiobook was provided by the author, narrator or publisher at no cost in exchange for an unbiased review.

This book was a fast paced, non stop action book. It's definitely not for the young. It's about sex trade, human trafficking etc... I really enjoyed this book and how it was a fast paced, there were no lul's in the book. If there are more books to come I will be first in line to get them. The narrator did a great job. This book is worth a credit.

Not everything about this book was bad. The pace was good and the writing was clear - never confusing. The narrator does a good job.
I did not like it. I have never thought this about an author, but I do wonder if this author just does not like or respect women. So many times I was dumbfounded at the shallowness of the characters, especially the women. The bad guys are horrible without even a hint of a good trait. The good guys are no better. I struggled to get through this. I will not read another by Mr Fortier.
I was gifted this audiobook in exchange for an honest review.

I wouldn't recommend this if you don't have a strong stomach, but if you like a good "justice is served, who will live, beat 'em up" then I highly recommend this. The story is fresh and the characters are well written, with good back stories and interesting relationships.