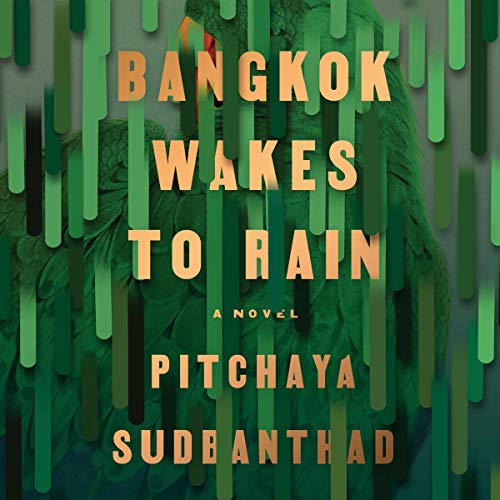 By: Pitchaya Sudbanthad
Narrated by: Euan Morton
Try for $0.00

"Recreates the experience of living in Thailand's aqueous climate so viscerally that you can feel the water rising around your ankles." (Ron Charles, Washington Post)

A missionary doctor pines for his native New England even as he succumbs to the vibrant chaos of 19th-century Siam. A post-World War II society woman marries, mothers, and holds court, little suspecting her solitary fate. A jazz pianist in the age of rock, haunted by his own ghosts, is summoned to appease the house's resident spirits. In the present, a young woman tries to outpace the long shadow of her political past. And in a New Krungthep yet to come, savvy teenagers row tourists past landmarks of the drowned old city they themselves do not remember. Time collapses as these lives collide and converge, linked by the forces voraciously making and remaking the amphibious, ever-morphing capital itself. Bangkok Wakes to Rain is an elegy for what time erases and a love song to all that persists, yearning, into the unknowable future.

Named a Best Book of 2019 by The New York Times, The Washington Post, Paste, and Kirkus

"[An examination of] hidden, overlooked spaces, where ghosts and spirits and discarded dreams orbit, even as people try to outpace the past...[stories] intersect and build on one another, like banana leaves woven to make a floating offering for the water spirits.... Bangkok is changing too fast, shedding layers of its history like the skins of a snake. Yet the city retains its allure, and the quest to return is like some animal." (New York Times Book Review Editor's Choice)

"Fluid in its structure and aqueous in its themes, the novel vividly evokes the teeming, sweltering city." (The New Yorker)

"Captures the nation’s lush history in all its turbulence and resilience...flowing gracefully from historical fiction to contemporary realism to science fiction... Entrancing... Sudbanthad’s narrative is not just a tribute to his home, it’s an act of resistance against the city’s mildew and amnesia…a way of preserving what is otherwise inscribed only on the liquid surface of memory." (Washington Post)

What listeners say about Bangkok Wakes to Rain

I loved this book. I'm definitely partial to literary fiction. This was beautifully written and profound. I think the connection between these people was unusual and special.

Maybe the worst narration ever

I understand it’s a supremely difficult book for narrators. English accents, Thai accents and names, American accents, gay, straight people, but the monotone deeply masculine American narrator misses every subtlety this book consists of.
I don’t blame the narrator but the producer for casting such an unsuitable voice for such a brilliant book

Why have a reader read stories about Thailand but this reader can not pronounce Thai words and names? I can not finish the audio because it sounds like finger nails scratching on a black board.
Did you think that people would not notice? Is Thai such an unimportant language that it doesn’t matter how you pronounce it?
Embarrassing & insulting.

Past, present and future Bangkok lives

This book consists of interwoven stories about people (and animals) who are born in, come to, or flee from Bangkok. Over time, the area changes from waterside jungle to a city of skyscrapers, and after sea levels rise, to the Venice of Asia.

Several tragedies mark the characters lives, but this isn’t a dark and brooding book. All of the characters miss someone or the place they used to know.

I recently read Swann’s Way, and I think that if Proust were a modern author, he would be writing like this. This book has similar introspection with 10 times the action, a bit of sci-fi, and a bit of the birds point of view.