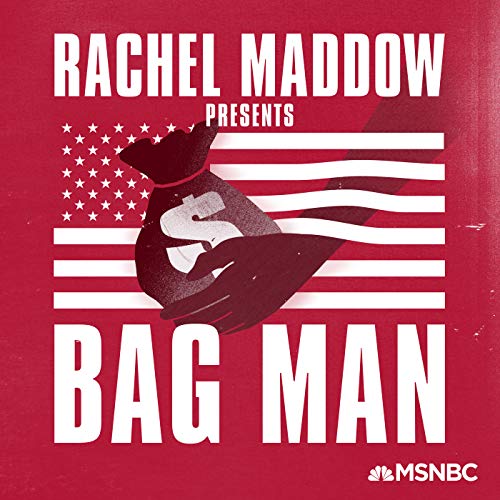 What listeners say about Bag Man

I gave up trying to listen to this on audible after listening to multiple advertisements every few minutes. I tried to skip forward and it kept sending me back to the beginning and again commercials. Will try to listen on MSNBC and hope there won't be commercials.

The story is engaging, Rachel's read is great, the audio clips further enrich a fascinating story, but the commercials are a bummer. I'd be happy to buy it commercial free. Any chance that will be an option?

I was 19 years old at the time this all happened and arguing with my father, a staunch republican and constant supporter of Nixon and Agnew to the bitter end. I could not articulate well in those days, of why I hated Nixon and Agnew and what they were doing to our country. This podcast tells me everything I did not know then. Love how Rachel weaves the events of this era. Can't wait to get my hands on the book.

I literally could not listen to this. Archival audio clips are fine, but Rachel talking over music and other noise was driving me nuts. I just want to listen to the audiobook. If this is as close to an audiobook as there is, nevermind. Love Rachel tho.

Way Too Many Commercials

Gave up after episode 1. Way, Way Too Many Commercials Hopefully they will turn it into a normal audiobook and I'll buy it.

I loved Rachel Maddow's ability to draw in the listener. I was always left with a feeling of wanting more.

It is awful listening to all the adds!! Much rather buy the audible book. Can’t keep tract of anything with all the chatter between every chapter.

Why am I listening to ads? I paid for the book. Maybe my settings? I want like it.

I was delighted by the careful fact based presentation of the Agnew saga. Ms. Maddow did a very good job narrating the material and she resisted the temptation to make snide quips which would have,somewhat diminished the overall impact of the reporting. I am looking forward to more work like this from Ms. Maddow and her collaborators