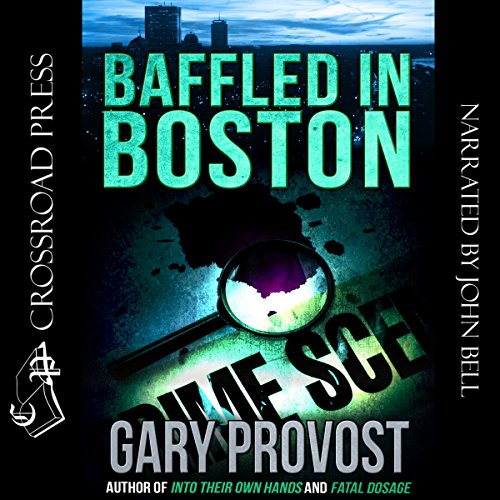 Baffled in Boston marks the debut of the most likable - and unlikely - sleuth to come along in years. Burned-out true-crime writer Scotty Scotland has been abandoned by his wife, ordered to give up coffee by his doctor, and according to his latest review, he should give up writing too. He spends his days winning imaginary arguments with his wife, defacing reviews of his novels, and counting flowers on the wallpaper. But when his best friend Molly, a nationally syndicated advice columnist, is murdered, Scotty must get out of his pajamas and into action to find the killer.

I'm competing with 18,000 preachers, plumbers, writers, shrinks - and a set of quintuplets - to be the new you. If I win the contest, I could solve a lot of problems - and maybe your murder, too. The problem is, between the paper's sleazy management, bitter rival columnists, and the psychos who read your column, I've got more suspects than Walgreen's has Rolaids, and so far, I've only ruled out Ann and Abby.

I read it in one sitting.

I have never read a book by Gary progress. I now want to read all of his books. This book was very quirky and made me laugh multiple times. It is not a book I would usually read, but when reading the summary and it said he spent his time having fake arguments with his wife I knew it was going to love it and I did! It is very small it is very quirky and written very well. I lovedThe characters I think Mongas was my favorite. He wasn’t a big part of the book but big enough that I grew to love him. LOL! If you love the following a corky detective who gets threatened fears for his life oh yes and is also having an affair with a married woman this is the book for you I found it so funny and I read it in one reading. I hope you love it as much as I did I almost NV you for not having started reading and getting that all this is going to be a good book feeling. Happy reading!

Baffled at the Reviews

I picked up this book because this narrator has an iconic voice to tell mysteries.

However, I didn’t like the story. I hated the MC. In the first pages, he has no motivation to do anything. Then it’s like it’s never happened, even when he hits dead ends. Anyone who has been in a slump (not to be confused with a diagnosis of clinical depression) knows if you’re at a low with self esteem, commitment, trying to get on your feet, you need more of a cheerleader or support group. Or a series of meeting goals.

Not a good story - but Bell is a wonderful listen.

The characters come to life through fantastic dialogue that keeps this mystery entertaining from start to finish.

This is an awesome story and the author's wit and style is fantastic! A talent lost too young!