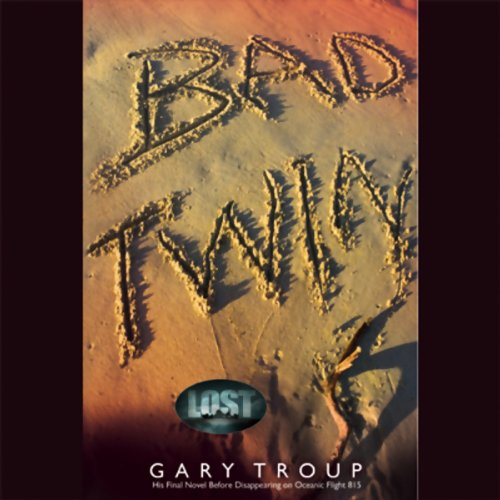 Paul Artisan, P.I. is a new version of an old breed: a righter of wrongs, someone driven to get to the bottom of things. Too bad his usual cases are of the boring malpractice and fraud variety. Until now.

His new gig turns on the disappearance of one of a pair of twins, adult scions of a rich but tragedy-prone family. The missing twin, a charismatic poster-boy for irresponsibility, has spent his life daring people to hate him, punishing himself endlessly for his screw-ups and misdeeds. The other twin, Artisan's client, is dutiful and resentful in equal measure, bewildered that his "other half" could have turned out so badly, and wracked by guilt at his inability to reform him. He has a more practical reason, as well, for wanting his brother found: their crazy father, in failing health and with guilty secrets of his own, will not divide the family fortune until both siblings are accounted for.

But it isn't just a fortune that's at stake here. Truth itself is up for grabs, as the detective's discoveries seem to challenge everything we think we know about identity, human nature, and family. As Artisan journeys across the globe to track down the bad twin, he seems to have moved into a mirror-world where friends and enemies have a way of looking very much alike. The P.I. may have his long-awaited chance to put his courage and ideals to the test, but if he doesn't get to the bottom of this case soon, it could very well cost him his life.

Troup's long-awaited Bad Twin is a suspenseful novel that touches on many powerful themes, including the consequence of vengeance, the power of redemption, and where to turn when all seems lost.

Bad Twin is the highly-anticipated new novel by acclaimed mystery writer Gary Troup. Bad Twin was delivered to the publisher just days before Troup boarded Oceanic Flight 815, which was lost in flight from Sydney, Australia to Los Angeles in September 2004. He remains missing and is presumed dead.

I purchased this audiobook because I'm a fan of the Lost TV show, which this book is affiliated with. I figured that it would be an ok book that would offer clues to the TV show. I was right about the clues, but the book has far exceeded my expectations. It is a well written detective mystery. I am curious as to who the author is though.

This was very entertaining!

Would you consider the audio edition of Bad Twin to be better than the print version?

I never read the print version

The twists and turns were great!

Scott as always is a master narrator!

Talk about a shamless, pointless tie in. This book is so useless in every way, I can't even begin to explain what a waste of time it is. I'm a huge fan of LOST, which I find to be incredibly well written, so I got this book hoping that it would be a decent enough story - boy was I wrong. If you're truly a fan of the show who appreciates good writing, steer clear of this one, it will leave you with a bad taste in your mouth.

This has to be one of the worst books I have ever read. The "detective" never does any detecting. He simply makes guesses with no evidence. He never asks the most obvious questions. All the answers just fall into his lap without him even trying. And the most laughable part? Literally every woman he meets wants to have sex with him. All he has to do is meet them and they simply can't resist him. Even to the point of one character sacrificing her career because of the love she feels for him after spending a few hours on a plane. My guess is the "author" (no surprise he kept his real identity a secret) is simply projecting his fantasies onto a fictional character.

Do yourself a favor and stear clear of this one.

Bad Twin is a must for all devout Losties. The author Gary Troup is not only an anagram for Purgatory - it is also Parrot Guy - which is way more fun to contemplate. A great listen as you surf the Lost web sites trying to guess who actually wrote the book. Stephen King denies the rumors.
Interesting mystery story nicely read. Who doesn't love a bad twin/ good twin tale full of clues about your favorite show? Cross your finger's the Castaways discover another Paul Artisan Private Investigator story.

Better than I expected!

When Sawyer (on 'Lost' the TV show) was reading the manuscript of this book on a recent episode (3 May) he said it was a good story. Unfortunately, he never got to finish it - you'll have to watch the season 2 reruns to see why. When I found it was available here I just had to have it...ABCs marketing worked on me!

As a Lostaholic, I was pleasantly surprised and even chuckled a few times at the references. I had not read any of the reviews so I didn't know about the connections to the show. I especially loved the references to Scot----...oops! Sorry, I don't want to give too much away! If you like 'Lost' the TV show, you'll love this book and the fascinating clues in it.

It's a good old fashioned detective story that stands on it's own so even if you don't watch 'Lost' it's still a good listen.

Should have burned in the plane crash!

If you're a fan of mystery novels, this one is so poorly written you'll kick yourself for getting it. If you're a fan of the show Lost (as I am)--the worst episode of Lost is written better than this whole book. And there are no real "clues", so don't bother. It's a good thing Gary Troup went down with the plane, no chance of giving us another bad book like this. If you're a fan of Scott Brick, (as I am) you have to wonder what ever possessed him to read this one. A waste of his talent for sure.

Like some of the other reviewers, I picked this up because I am an avid fan of LOST, the LOST Experience, etc. I wanted to find out what the Hanso Foundation found so upsetting about this book, as their advertisements indicated that the book spread lies about the nature of the Foundation. Maybe all will be made clear on the show itself, but this book offers NO such revelations. Hanso is mentioned twice throughout the story - once at the very beginning and once at the very end. It really has NOTHING to do with the plot line (such as it is). You get the feeling it was added in to make a BAD book marketable. I might have been OK with being suckered into this book had it at least been well written, but it is not. The detective in the story tediously journeys from one location to the next, each time being told where he should go next and who to talk to there. He makes no deduction, but simply follows the mind-numbingly dull instructions of each character he encounters. Don't waste your time with this one...

I think that the title for this book is inadvertently a clue as to its nature. Although it kept me entertained enough to pass the time at the gym, I felt that the characters were either not very well developed or very unoriginal and thus kind of "cheesy" ... the oversexed wife married to clueless older man, the perfect-seeming yet ultimately less than admirable rich boy, the wise old Jewish friend. Actually I liked him. He had at least a few interesting things to discuss. And the very best part was the narration by Scott Brick, who I have unintentionally listened to in 3 of my last 5 books.
Unless you are a rabid "Lost" fan and must absorb any and all things associated, I would not recommend this book.