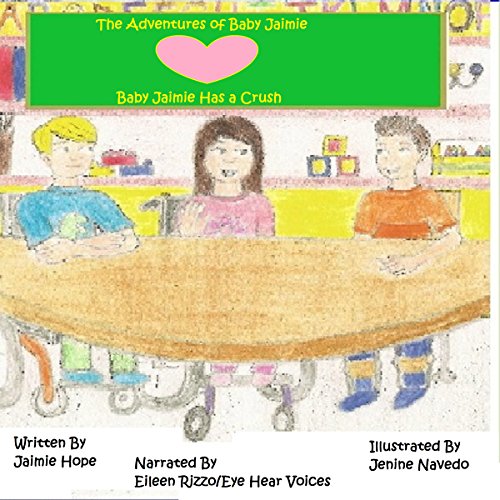 Ever since she met him, everyone thought Baby Jaimie's first crush was Derek. Derek even thought so. That's why he asked her first-grade teacher, Mrs. Smith if he could come visit her. The day of the visit didn't go as planned. While Derek was introducing himself a new student, Jack, entered the room and stole everyone's attention. Especially Baby Jaimie's. For that reason, Derek took an instant disliking to the new kid. Baby Jaimie is forced to choose between Derek and Jack, and she doesn't know what to do. Is there a way to combine old friends with new friends? Can't they all just get along? Find out in The Adventures of Baby Jaimie: Baby Jaimie Has a Crush.

What listeners say about Baby Jaimie Has a Crush

Would you listen to Baby Jaimie Has a Crush again? Why?

I would. It is such a cute story.

What was one of the most memorable moments of Baby Jaimie Has a Crush?

When Baby Jamie Broke up the fight between Derrick and the new kid.

When the new kid arrived.

No. there weren't any extreme but, it was a little touching