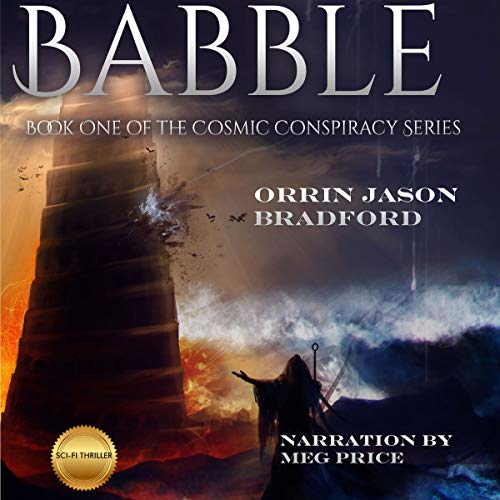 For Bobbie Cagle, the normal difficulties of growing up are overshadowed by his unique condition, being misdiagnosed as autistic. Caught between his loving mother and those who would use him for their own purposes, Bobbie stands at the center of the universe and forces the human race to the edge of their own evolutionary line.

The Lord said, “If as one people speaking the same language they have begun to do this, than nothing they plan to do will be impossible for them. - Genesis 11:6

Upon the Towers of Babel, the people of the Earth scattered, and silence fell. Now, on the brink of a new age, the human race leaps forward into the evolutionary void and changes the course of human history forever.

For young Bobbie Cagle, the normal difficulties of growing up are overshadowed by his unique condition. Placed on the spectrum, Bobbie’s inability to communicate normally is misdiagnosed for years as autism and masks the great part in human history that he is destined to play.

Unknowingly able to receive transmissions from the farthest reaches of the universe, young Bobbie’s life is forever changed when his unique ability is discovered. Coveted by those who would use him for their own purpose, Bobbie and his mother flee their home out of desperation and fear. In the course of their escape, the truth behind Bobbie’s gift and the effects it may have on the planet begin to the reveal themselves, all the while the future of the human race hangs in the balance.

Find out what fate has in store for the human race and grab your copy of Babble today!

What a neat story! It's about a boy named Bobby Cagle who has special abilities. It's diagnosed as autism, but it's not! And once people know, they want him. His mother tries to protect him, and the chase ensues. Very good story, great characters, and I enjoyed the narration of the story. It kept my interest and I really enjoyed listening to it :)
I was given this free review copy audiobook at my request and have voluntarily left this review.

I enjoyed this book.It was well written and very interesting,as well as a thriller.Meg Price was a fine narrator.I look forward to reading future books in the series.I was given this book by the narrator,author or publisher free for an honest review.

Summary: A mix of a fantasy and a low-speed chase story. Angela Cagle tries to keep her son safe by running away with him.

- Don’t read the book blurb! It actually explains way too much.

- 90% of the story’s about Bobbie and his mother being chased by Homeland security agents and the kid’s distraught, not-entirely-pleasant father. About 10% concerns what’s written on the book blurb. But it’s more fun if it unfolds organically.

- Characters 4/5: Lifelike and sympathetic. You love who you’re supposed to love and hate whom you’re supposed to hate. A few fall in a gray area. There were also a couple of characters whose involvement was so slim and rarely mentioned that it was hard to picture their relevance. (The mysterious man pulling strings for one.)

- Plot 3.5/5: The chase follows some logic. Only a few places of mystical intervention happen to get the players where they’re supposed to be. The Homeland Security agent’s involvement is a huge stretch, but at least it’s addressed a few times.

- Content Warnings: Contains a few curse words and at least one scene I’d consider too adult to label it a “clean” book. Also contains a scene or two of torture.

- Pacing 3/5: It could have unfolded much quicker. The scenes from Bobbie’s point of view, especially those in other lands will charm most people, but I found them distracting and pointless. Perhaps it’s just the fact that I don’t particularly have an affinity for any of the worlds he visited.

- Ending 5/5: Love the wrapup. It leaves room for more but gives one a sense of closure.

Conclusion: Enjoyable if you can deal with the stuff in the content warnings.
*I received a free copy from the author; the choice to review was my own as well as any thoughts contained herein.

This was a nice blend of fantasy and sci fi. The characters are wonderful and engaging. The narration is pretty well done, too. All in all, I believe this is a book worth listening to.

Exciting start to a new series

I really liked how this book concluded, and the story itself was great and had just the right amount of the unexpected to keep me listening until the very end.

There were several details that detracted from my enjoyment of the story. For example, there was the improbable event where a metal bar is thrown at a man and the bar penetrates his body. No human could throw something with enough force to penetrate another's body. There was also a mistake in the narration where a word was repeated. In addition, I had great difficulty following the shifting of perspectives and periods of time. For the first half of the book, I wasn't sure if it was about a two year old, or a sixteen year old.

While I enjoyed the surprise about the doctor's motivations, I was disappointed in the character development of the dad. He started out as a violent asshole, and then suddenly he's like Mr Rogers.

Despite the aforementioned issues, it was a great story with a good performance by the narrator. I can't wait to find out how the series progresses.

I will be listening to this audible book again, in a few years. For me, it is that good. I felt for the characters, even the "evil/bad" one. I did not pick up on whether this is the start of a series. I sure hope it is. Way too many questions not answered. If the author did not intend it to be a series, I humbly ask for more! I highly recommend this book. Now for the obligatory: "I was given this free review copy audiobook at my request and have voluntarily left this review."