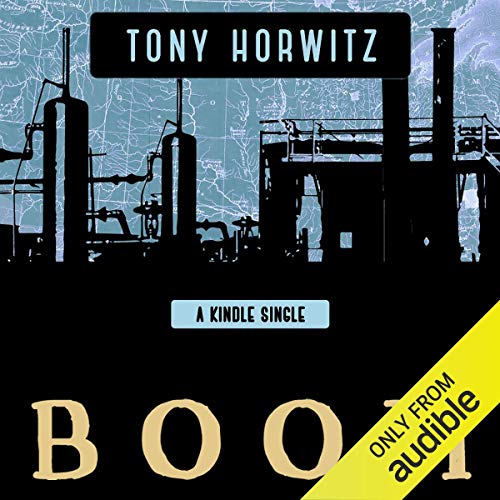 By: Tony Horwitz
Narrated by: Matt Morel
Try for $0.00

In BOOM, prize-winning reporter Tony Horwitz takes a spirited road trip through the wild new frontier of energy in North America. His journey begins in subarctic Alberta, where thousands of miners labor in an industrial moonscape to extract the region's oil-rich tar sands. Horwitz then follows the route of the proposed Keystone XL Pipeline that may carry tar-sands oil from Canada across Montana, the Dakotas, and Nebraska en route to Gulf Coast refineries.

Horwitz's 4,000 mile adventure brings him into contact with astonishing characters on all sides of the energy boom. He meets "rig pigs" and "cement heads" hoping to make a quick fortune laboring in the oilfields; casino operators and strippers eager to relieve workers of their high wages; farmers and Native Americans who fear the pipeline's impact on land, water, and climate; and Keystone cowboys who tout the economic benefits of the oil rush in progress on the Plains.

BOOM is both a gritty, boots-on-the ground odyssey and a profound exploration of what's at stake - for the environment, the economy, and foreign policy - as America becomes the largest energy producer in the world.

Tony Horwitz is a Pulitzer Prize-winning journalist who spent a decade as a foreign correspondent, mainly covering wars and conflicts in the Middle East, Africa, and Europe for the Wall Street Journal. His books include the best sellers Confederates in the Attic, Blue Latitudes, Baghdad Without a Map, and A Voyage Long and Strange. His latest book, Midnight Rising, was named a New York Times Notable Book of 2011 and one of the year's ten best books by Library Journal and won the 2012 William Henry Seward Award for excellence in Civil War biography.

Horwitz has also written for The New Yorker and Smithsonian and has been a fellow at Harvard's Radcliffe Institute. He lives with his wife, Geraldine Brooks, and their sons, Nathaniel and Bizu, on Martha's Vineyard.

" Boom is the very model of dauntless reporting, lucent prose, memorable portraits of a range of characters, all in a story driven by a moral dilemma with stakes that couldn't possibly be higher.” ( San Francisco Chronicle)

What listeners say about BOOM

This is a great overview of the oil industry in Canada in the pipeline. Even though the outcome has been decided recently it provides an excellent biographical history of the people involved in it. Great easy listen

I really enjoyed this. It was a human story of something I’ve seen so often in the news. Really good examination of the tension between climate change and jobs wrapped in a huge road trip. Americana meets science meets politics. Highly recommend.

How sad to know there won't be more from this incredible talent, who brings each person and place to life in such lovely detail.