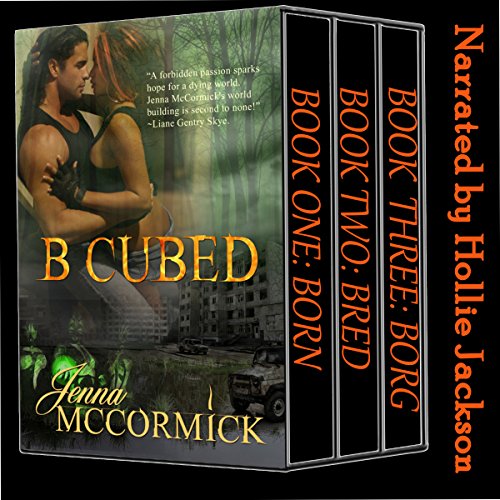 By: Jenna McCormick
Narrated by: Hollie Jackson
Free with a 30-day trial

Bred: Genetically engineered slaves who are the protectors of the Born.

Borg: The cybernetically enhanced enclave that split from the Born humans.

B Cubed: These three factions are all that remains of the human race after the world stopped turning. Scavenging in the darkness for what little is left, the war between them rages on though few know why. It begins with a child's prophesy and can only end when they unite.

B Cubed Book One: Born

From the moment he spies her silhouette cast by the bonfire, Cormack understands what it is to yearn for something he will never possess. Breds are made to provide for the natural born humans, dig their homes deep beneath the surface of the earth and to protect them from the ever-present cyborg threat. A Bred who reaches beyond his station will be recycled immediately, yet Cormack cannot get her visage out of his mind. Until he unearths a box, buried long before the earth stopped spinning.

Rothguard has but one desire, to rid himself of the overwhelming urge to mate and free his mind to focus on science. Being Bred means to be forever enslaved, to the Born and his own physiological needs. In order to free himself and the Breds still in captivity he requires a Bred female to study. His life as a sex slave taught him about a woman's fickle pleasures, but his work demands more information, no matter how distasteful he might find the chore.

The Earth is dying. Only one man has the ability to save it but Dayen can barely function. Saddled from birth with a crippling form of telepathy, he is unable to give or receive touch. So what will he do with the Born woman destined to be his mate? A woman who has more reasons than most to fear the touch he longs to give her and her alone?

What listeners say about B Cubed Trilogy: Box Set

I was really intrigued by this series. It is a very smexy read, but it could stand on its own with out the sex. I mean, the sex is great and a key point for some elements, but it could be removed and you would still have a fascinating read.

Book One - Born
This sets up the whole story and gives you all the exposition about the situation on Earth at this time. Dystopian reads always intrigue and highlight the worst of mankind while also showing the best.

Allora and Cormack have that instant chemistry, which leads them to a bit of trouble. There is plenty of steam, but it is more about that bond forming between them. They are like the Romeo and Juliet of the series.

The story feels slow at times, but once holes are filled in, things really start to pop.

Book Two - Breed
This should have a trigger warning, cause there are some deep parts and a touch of detail on some non-consent. Rothguard and Mel certainly go through the emotional ringer. This is by far the most dramatic of the three stories. Prepare for serious angst mixed in with your steam.

This story makes you question why any of them would want to save the Born at all. Aside from Allora, who isn't really even Born, I have yet to see one who is work the effort.

The end of this book makes you eager to hop into he third, to see what the deal is with Issac.

Book Three - Borg
Jumping ahead into the future for this book, we have Allora and Cormack's son all grown up. He faces many things both internal and external, in addition to being the leader/savior of all mankind. This is another story that should have a trigger warning, the heroine was raped and we have a few flashback details.

This book also should have been longer. The end felt rushed and was a total fast forward to the end result. All the build of the series on why the Earth stopped and how to fix it, we got two lines of resolution. I wanted more show and less tell in the end.

Hollie Jackson does a fabulous job with the narration. She has been a favorite for my ears for some time. I always know her reads will be well paced, deliciously voiced and a delight all around. She does this series credit and makes everything gel all the better.

I am intrigued enough by this series to look for other works by this author. She shows serious promise and has a clever imagination!

I’m very very pleasantly surprised by this Trilogy!
The Romance, Sex and Sc-Fi Story-line are all equally well written and enjoyable.
I was surprised the story was that good. Even without the sex I would have enjoyed the Science Fiction story.
But if you (like me) enjoy some Romance and good Sex in your Audio Book, you’ve come to the right place!

For me Jenna hit all the right notes.
This Trilogy is mature, serious, believable and very well written.
I felt immediately engaged in the story and connected to the Main Characters (in all 3 books). I think this is a big part of why the romance and sex scenes where this good for me.
If you can’t connect to a Main Character, sometimes sex scene’s can be kind of boring (for me anyway).
But the way Jenna writes them.. WOW.. it was hot! Like really really really hot!
Like ‘I think about some of the scene’s when playing with myself, and will for some time to come’ HOT!

This is no ‘vanilla erotica’.
I do think you have to be somewhat open-minded about sex in order to fully enjoy and appreciate this trilogy. (for example, there is some bondage, sex toys and a rape scene)

All 3 books have 2 different Main Characters and a complete (love) story. But all 3 books together complete the entire Sci-Fi Story-line.
They were all equally good. As I progressed I thought they kept getting better, but maybe if I begin the trilogy anew, the first story is my favorite again. :-)
They were each very different with a different appeal.

I thought the narration was very good and enjoyable. (if not, I wouldn’t/couldn't be this enthusiastic about the story)
I could easily keep Characters apart. The relaying of emotions and intonation were perfect. No fake turned on voice in the sex scenes.
I would gladly listen to other Audio Books narrated by Holly.

I wholeheartedly recommend you check this trilogy out!
I got this Audio Book for free (to review), but if I had known it would be this good and hot and so exactly what I like, I would have happily spent a Credit on it.
This is not a story I will forget soon, and I’m definitely gonna listen to it again in the future.

I got this Audio Book for free (thanks!). I'm voluntarily leaving this review.
Opinions and ratings are my own and not influenced by how I got the Audio Book

and a great great story also. i hope i can still listen to plain sci-fi after this. i maybe spoiled.
great that its a big boxed set.(else u would have to get the other vols's) tks


i got a free copy of this