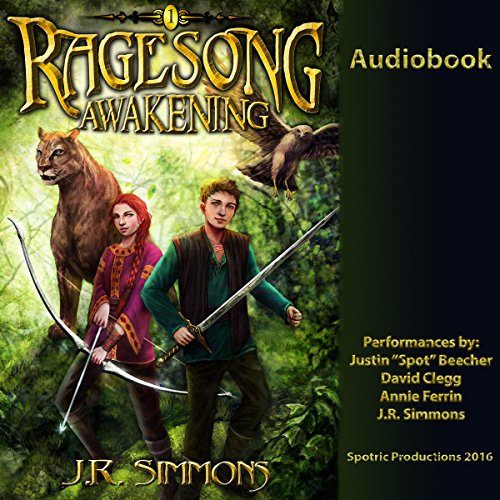 When the peaceful kingdom of Fermicia is enslaved by a power-hungry renegade, its only hope lies in a band of unlikely heroes: two children whose musical abilities allow them to harness the power of Ragesong, and their shape-changing guides. Jake starts his first day of junior high completely oblivious to the fact that he has been chosen for something incredible. That same afternoon, he learns that he has been marked as one with the power to save an entire kingdom. Through the course of his journey, Jake discovers that his advanced musical abilities are peculiarly connected to a mysterious power known as Ragesong. Joined by a shy, young girl with similar musical talents and two Changelings that hold a fierce loyalty to their homeland and king, Jake must learn to harness this ability in order to survive the dangers of a hostile new world.

What listeners say about Awakening

The story and the narration are great. This is written for a teen-tween audience, but is totally enjoyable for an adult. Wish the sequels would come out on Audible.

So I’ve previously read the saga but I’m a delivery driver and like to listen to something, music has gotten a bit boring so I took to listening to books and I remembered rage song looked it up and was pleasantly surprised to see at least the first one (please make more audio versions) it was good! But I feel like there could have been some better expression in certain parts but still I enjoyed it so much. Thank you!

Our whole family enjoyed listening to the different voices! we would recommend this book to everyone.

This is my son's review:

It was very detailed, and he used good words. The story had a good theme: two kids being adopted by shape shifters and they went to go save the kingdom Cardonin. The characters were great.

I liked the cliffhanger at the end.

I loved this story and I can hardly wait to continue. what rich full characters..