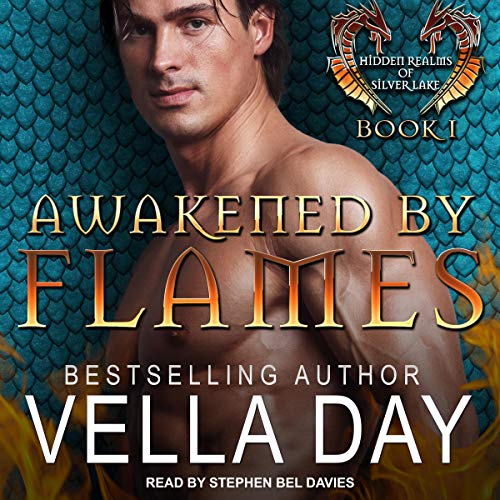 By: Vella Day
Narrated by: Stephen Bel Davies
Try for $0.00

The only thing between this werewolf and his destined mate is a portal to a different world.

It's crazy. Finn McKinnon knows dreams can't be real. So why does his wolf shifter side have the overwhelming urge to step through a portal into a mysterious new realm? Is Kaleena Sinclair his mate or just a figment of his overactive imagination?

For years, Kaleena has known that Fate has designated the deliciously hot man from Earth as hers, but she can't reveal she's a dragon shifter - at least not yet. Dream-walking has been her only connection to him, but damn, Finn still thinks she doesn't exist. So what's a girl to do - especially when Finn is her sole chance at survival?

Before he knows it, Finn is thrust into a dangerous journey - a journey so unique and sensual that the life he's known ceases to exist. The clock is ticking, and Finn must survive impossible odds if he is to save his future mate. But how in the world can they fulfill their destiny as fated mates if some ruthless force is hell-bent on keeping them apart?

What listeners say about Awakened by Flames

I read the ebook back in 2018 so it was great to see that it was in audio. I do not think Vella could o picked out a better narrator. Michael Johnson did an amazing job. I think I could listen to his voice all day.

This was truly an awesome read. I just loved the “Weres and Witches of Silver Lake” series so it was good to see another series that is a spin off from that series. If you loved that series you will truly love this one.

Finn was one even though he was mention in the “Weres and Witches of Silver Lake” Series I truly did not get to know him well until this book. Reading this series you are going to fall in love with Finn and Kaleena. These two are truly amazing characters and perfect on starting this series off. Though I have to tell you I have a crush on Declan and a small crush on Thane who are Kaleena’s brothers. Looking forward to their stores.

In this series we are going to get the sexy dragon shifters that we crave. Oh, we will have the villains as well but trust me it just makes the male hero in this story even more sexy.

Kaleena was being held captive. She was truly in danger. I love that she was able to dream-walk with her fated mate Finn. I was wondering how a wolf shifter was going to go up against a dragon shifter. Oh, don’t worry this story has a happy ending.

I fell in love with Kaleena’s family. They were very accepting of Finn being Kaleena’s fated mate. They did not appear to look down on him because he was a wolf shifter. I truly look forward getting to know them better in this series I do wish we would of had more interaction of Kaleena getting to know Finn’s family. Just because family I believe is everything to Finn.

I just loved Finn’s bravery. It has to be a scary thing to teleport to another world. To go into the unknown. To face an unknown danger. There had to be a lot of thoughts going through Finn’s mind. Like, how was he going to find Kaleena? How was he going to save her? He will have bigger danger to face then he is prepared for.

Glad I got a chance to read this story and look forward to upcoming stories.