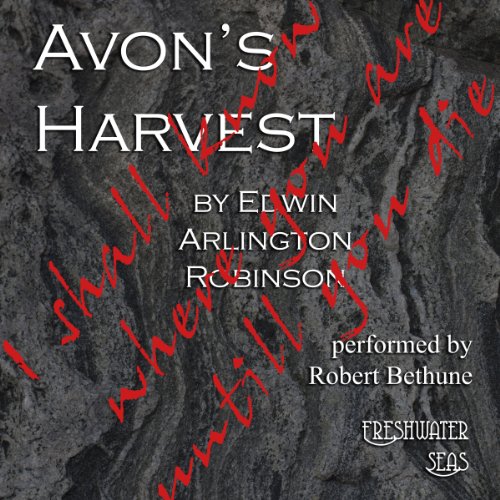 In Avon's Harvest, Edwin Arlington Robinson devotes the majority of the audiobook to one long narrative poem of the same title, which tells the story of how a man's life was destroyed by the slow canker of an unreasoning hatred he formed as a young man, and of a sudden act of violence that flared out of it.

Robinson's wields his sparse, simple, yet brilliantly polished verse like a scalpel, dissecting layer after layer of Avon's mind until the whole is laid bare as if on an operating table.The rest of the audiobook includings a number of short poems, most particularly the famous "Mr. Flood's Party," in which an old man's courage, fortified with liquor, suffices to get him home yet one more night.

"His new poem ‘Avon's Harvest’ is the most astounding of all he has written. It brings home two things about Robinson which have never been so marked: his intense dramatic power; and the fact that like Browning, certain of his work could be in prose. ‘Avon's Harvest’ would be a short story, though we doubt of an equal effectiveness in the hands of any prose writer we can think of.It is the story of a man possessed by a fear, and at times it is suggestive of Poe in its horror. But this is its only resemblance to Poe, for Robinson is as austere as New England can produce, and is verse is Puritan in its contempt for decoration. Often in other poems we have felt this to be a disadvantage. In ‘Avon's Harvest’ it is overwhelming in its power." (The Yale Literary Magazine, volume 86, p. 307-308.)
"With true New England frugality, it weaves a closely knit, formidable tragedy out of meagre materials - a college antagonism, a blow, a long worm-eating revenge; and its creeping emotion of horror is all the more powerful, perhaps, because of the poet's restraint. Probably a psycho-analyst would diagnose Avon's caes as insanity - delusions induced by fear of the serpentine, ruthless being whose offensive love had changed into consuming hatred. But such a gradual burrowing insanity was never more sharply and powerfully presented. The thing is done with a kind of cold thrift, as effective in its way as Poe's lush and shadowed eloquence; the music in the one case being slow and stern, and in the other rich and full of sombre color." ( Poetry, volume 18, p. 273-274.)