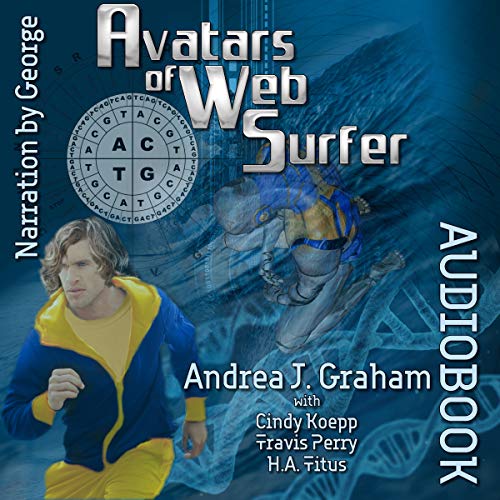 In the 22nd century, cyberspace has no bad AIs, only bad coders. Artificial intelligences lead finite lives with no hope of eternity, but they strive to bring about the coming of an AI savior. Alexander McGregor is just an infant when his father converts his cells into biological supercomputer components, but he may be the Messiah figure AIs have longed for, even though on one level he is only human.

Sander is enslaved to his code as he serves a billion users worldwide, users he appears to as separate avatars of himself. Each avatar has its own personality, but all of him are linked together in a shared mind. He reigns over most of Earth's computers in a global society where tech dependency can kill. Freedom calls Sander like a siren. His answer could shake the Earth. Come. See the rise and fall of the AI man in these 10 episodes. Each features a different AI user.

What listeners say about Avatars of Websurfer

an episodic anthology with continuity

Avatars of Websurfer is a unique multi author anthology. Most anthologies with shared worlds will sometimes feature continuity errors or be so vastly independent of each other that the shared world is lost.

This anthology however, reads like a novel. Stories by different authors will reference each other and keep the continuity established in previous stories. I think great care must have been taken in the editing process to ensure that these stories read like a series.

In fact, rather than chapters each story is called an episode, and like a TV show it leaves off with plenty of room for a season two.

The stories in this anthology feature a diverse cast of characters. I was impressed with the narrator's ability to handle a wide range of accents, from Spanish to middle Eastern. He also handled the character distinction between human and AI well. I also appreciated the producer's use of music to indicate scene breaks.