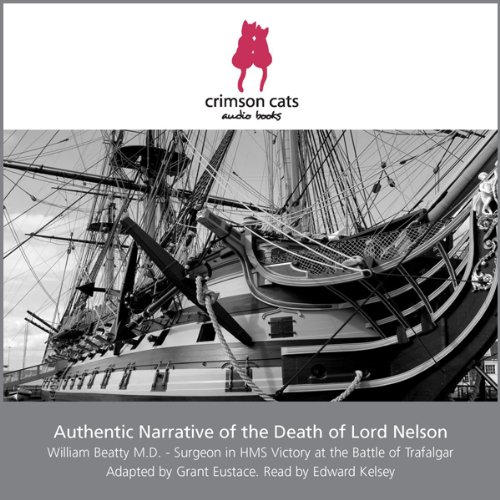 Authentic Narrative of the Death of Lord Nelson

An account of the Battle of Trafalgar written by William Beatty, M.D., who, as a surgeon on board HMS Victory, tended the dying Nelson.

Author: William Beatty had been in the Royal Navy for nine years when, in December 1804, he joined HMS Victory as one of its surgeons. His account of the most famous of all British sea battles, from the unique perspective of a ship’s surgeon, was an immediate success when it was published in 1807 and went into several editions. His subsequent medical career culminated in his appointment as Physician of Greenwich Hospital, and he was knighted by King William IV in 1831.

Adapter: Grant Eustace works as a writer in a variety of fields, from film to print, and especially in creating video and DVD programmes for the corporate sector, in both drama and documentary formats, of which he has scripted 300. But he started professionally by writing plays for BBC Radio 4, and ever since has returned regularly to both radio and audio. Having served in the Royal Navy, he also has more than a passing interest in Nelson.

Reader: Edward Kelsey has been a "media voice" for more than 50 years, though he is probably best known as Joe Grundy in The Archers and Baron Greenback and Colonel K in Dangermouse.

"Half the pleasure of this eyewitness account is the hugely entertaining way it has been adapted for audio.... This isn't Patrick O'Brien, it's the real thing." (Sue Arnold, the Guardian)

An excellent account, easy to picture the scenes and recounted in an extremely engaging way by an actual participant at the battle.