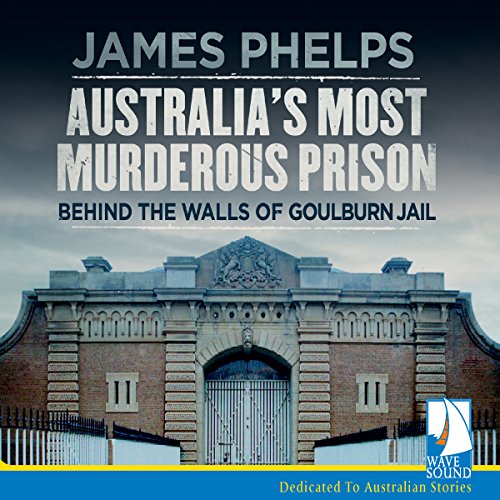 By: James Phelps
Narrated by: Stan Pretty
Try for $0.00

An unprecedented spate of murders in the 1990s earned Goulburn Jail the ominous name 'The Killing Fields'. Inmates sentenced or transferred to the 130-year-old towering menace declared they had been given death sentences.

Serial killer Ivan Milat, the 'Terror Five' militants who plotted attacks across Sydney in 2005, Brothers 4 Life founder Bassam Hamzy and gang rapist Bilal Skaf are just a few of the inmates inside Australia's most murderous prison. Meet them all here in Phelps' best-selling audiobook.

"A fascinating book, written in a very readable style." ( AustCrimeFiction)

What listeners say about Australia's Most Murderous Prison

An eye opener to the extent of power inmates, who are incarcerated for serious crimes, are able to continue their criminal activities from behind bars

The juvenile sound effects were annoying and not very convincing. A little more effort given to the accurate pronunciations of the foreign surnames would have given Pretty more credibility.

If you could give Australia's Most Murderous Prison a new subtitle, what would it be?

How the Nagle Royal Commision ensured that prison inmates continue their criminal enterprises from behind bars. A direct result of a one sided investigation where the only witnesses called to give evidence to events inside NSW prisons were inmates.

The abrupt ending to the story was somewhat disconcerting. A representation of a prison murder ended suddenly without even an epilogue.

Very interesting and informative. Gods to hear stories from various perspectives. It was well read and fast paced so never a dull moment.

A bit gory at times but otherwise a good read.

A Real Let Down

I am interested in all things "True Crime". This was tabloid flashy, and depended largely on shock value. The narrative was completely uninspiring and not engaging at all. I was originally keen to get all of this authors books, but will definitely be skipping them now.

Interesting subject let down somewhat by a tabloid style and an uninspiring reader. I would not buy further from this combination.

That was painful to listen to

The book felt like tabloid journalism, very sensationalist and did not flow well at all.
There were some interesting elements that could have been fleshed out, but alas the subject gets changed so abruptly. Stuggled with the audio performance, the terrible accents and the sound effects were so off putting.

Listening to this book was good.
The different stories were interesting to hear.
The narrator did a great job!
Definitely recommend this book!

Narrator is great. But so much better out there. It ain't no marching powder.
Basically it's a collection of short stories of prison rapes.
If that's your thing this book is for you. Liked his other stuff., not sure what this was meant to accomplish.

the stories were very interesting and I loved it when the narrator did sound effects, pretty funny.