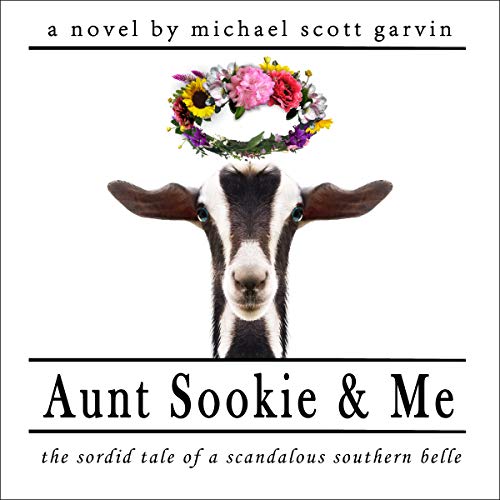 Aunt Sookie & Me: The Sordid Tale of a Scandalous Southern Belle

By: Michael Scott Garvin
Narrated by: Angie Hickman
Try for $0.00

Winner of The Royal Dragonfly Awards

Young Poppy Wainwright feels much like a deck of cards, shuffled around from a boozing mother to a beloved grandmother. Finally bussed to Savannah, Georgia, to live with her grandmother's cantankerous sister, Sookie. Through the enlightened eyes of a 13-year-old girl, the hilarity and insanity ensues.

From the best-selling author of A Faithful Son comes this rollicking romp of a ride that does not disappoint.

Aunt Sookie & Me: The Sordid Tale of a Scandalous Southern Belle is irreverent, hilarious, and heartbreaking. All political correctness is buried alongside the dead corpse in the family vegetable garden in this riotous book. But don't let the folksy and fresh recipe fool you, Garvin serves up a big helping of reality, cutting through small-town bigotry and bias.

"Aunt Sookie & Me is a heady and hilarious mixture of hard-won wisdom and Southern saltiness...the take deals with some weighty issues including sexual identity and domestic violence, but Garvin's compassion and light touch make this a highly entertaining and enjoyable novel." (Publishers Weekly)

What listeners say about Aunt Sookie & Me: The Sordid Tale of a Scandalous Southern Belle

I adored this book. The characters you will fall in love with despite their are oddities.

Ms Hickman did a fantastic job

Angie Hickman hit it out of the ballpark with Garvin's novel. She captured each of the different zany characters.

I can't wait for his next book this writer is amazing, he has a special gift for describing everything in a beautiful way.

This is a wonderful book that shows how to suppor

This is a wonderful book that shows how to support and accept family and friends in spite of your differences. Well written with characters you can't help but love.

Such a lovely, touching, audiobook.

I laughed out loud. I cried. The characters are so real to me they moved right into my soul. I finished the last page and turned right back to the beginning to read it all over again, to revel in it. Do not miss the chance to meet Poppy, Sookie and the rest of the crew.

Best audiobook I've heard in a while

Easy to listen this audiobook !!

I enjoyed this audiobook. It was funny and also just fun to listen. The characters were heartwarming and the descriptions of Savanah makes me want to visit there one day

I loved the writing (and wisdom) of this audiobook. Colorful characters and delightful setting with an unexpected twist. I would highly recommend!

Southern Spice with a twist

Garvin's audio book is hilariouly outrageous. Aunt Sookie & Me explains what it is like for someone who experiences gender questions through Southern spice and wisdom all rolled together.

Very enjoyable listening. with great humor and yet there were sobering parts that made you think about how much real life issues are added. Would love to see more about these characters.