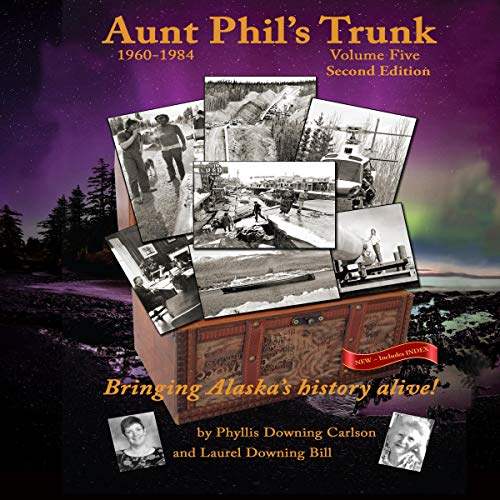 Alaska statehood - a historic 25 years! This fifth audiobook in the Aunt Phil’s Trunk Alaska History series highlights the first 25 years of statehood through short stories. Not only did the optimistic citizens of the Great Land create a government from scratch in just a few years, they also dealt with many challenges.

Aunt Phil’s Trunk: Volume Five shares firsthand accounts of survivors who experienced the 1964 Good Friday earthquake and the devastating tsunamis that followed that 9.2 temblor. It also features stories about the discovery of “black gold” on the North Slope in the late 1960s and how Alaska’s Native people fought for their land and won the largest settlement ever granted Native Americans. That agreement cleared the way for oil companies to build an 800-mile pipeline through some of the most rugged and remote country in the world during the 1970s.

Alaskans also learned that evil lurked under the midnight sun in the 1980s, as they ended the first 25 years of statehood with six mass murders. Women in Anchorage became prey when a mild-mannered baker turned into a butcher. Residents of Manley Hot Springs disappeared soon after a drifter arrived in their quiet town. And several citizens of McCarthy died when a newcomer decided he wanted to destroy Alaska’s oil pipeline.