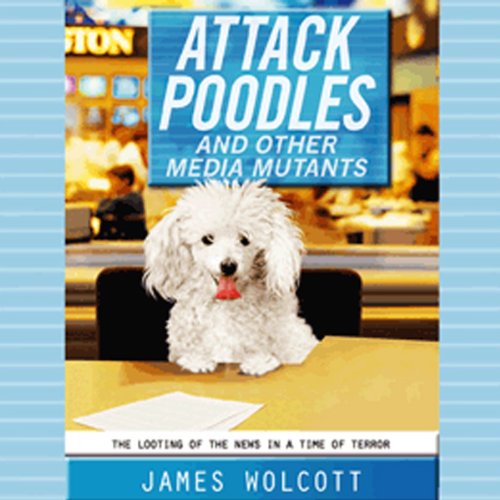 Attack Poodles and Other Media Mutants

The Looting of the News in a Time of Terror
By: James Wolcott
Narrated by: Dennis Boutsikaris
Length: 7 hrs and 9 mins
Categories: Nonfiction, Politics
3 out of 5 stars 3.1 (17 ratings)

Attack Poodles and Other Media Mutants

They are coddled and well-groomed. They chase after the latest scandal and then run around in crazy circles, using the TV studio as their show ring and wee-wee pad. There is no controversy they can't trivialize, no issue they can't vulgarize. They obey their political masters and betray the trust of the audience with every bark. They're the attack poodles: a new breed of celebrity pundit.

Wisecracking and impassioned, Attack Poodles and Other Media Mutants laces into an all-star cast of blowhard egotists who pound our eardrums and insult our intelligence: Bill O'Reilly, Joe Scarborough, Peggy Noonan, Dennis Miller, Laura Ingraham, Tucker Carlson. But it also delves below the surface squall of infotainment to show how attack poodles function as pets of the Republican party, guard dogs for George Bush, and tail-waggers for war.

In the iconoclastic spirit of Michael Moore's Stupid White Men, Al Franken's Lies and the Lying Liars Who Tell Them, and Molly Ivins' Bushwhacked, Attack Poodles makes serious fun of the pack mentality that has taken over politics and the press in this country and urges us to rip off our blindfolds before it's too late.

What a Difference a Decade Makes!

I've long been a great fan of James Wolcott, and look forward to reading his reminiscence on New York in the 1980s -- a decade so dreadful, I fled west, along with much of my generation. Attack Poodles is fun -- but so dated! Listening to Wolcott praise Lou Dobbs is painful. And really, he doesn't pay enough attention to Olberman. So much has changed -- though O'Reilly remains the same. Hannity, on the other hand, ain't near as swell as Wolcott thinks him to be. And a bit more on the madness of Coulter is always appreciated.

Suffers strongly from lift wing propaganda. Interesting to see how the hate and derangement has changed normal americans into people who can see no good at all.

Hope he knows what he is talking about because the listener probably won't. I tried to listen to the whole book but gave up half way through. I think he just wanted to write a book about his favorite blog.
If you like to listen to someone gripe about anything and everything then you might like it. I didn't. It would have better if he had organized his thoughts better before writing about them.