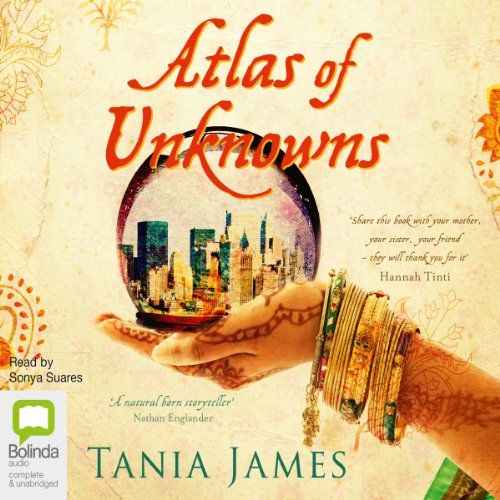 By: Tania James
Narrated by: Sonya Suares
Try for $0.00

Sometimes the hardest journey of all is finding your way back home…In the wake of their mother’s mysterious death, Linno and Anju Vallara are raised in Kerala by their father and grandmother.

When seventeen-year-old Anju wins a scholarship to study in New York, she jumps at the chance to embrace all that America has to offer, but in so doing commits an act of betrayal that severs her relationship with her sister. When Anju’s lies catch up with her, she runs away, helped by a kindly stranger who somehow knows things about Anju’s past. Meanwhile, Linno has begun a journey of her own: towards her sister, towards the memory of their mother, and towards a future she could never have imagined.

Atlas of Unknowns is an unforgettable tale of two sisters whose bonds are powerfully tested, and the secret histories and hilarious eccentricities of families everywhere.

‘James’s delightful first novel explores the hazards and rewards of wanting more than life willingly allots … The author, a young Indian-American, writes with poise, sly humor and an acuity both cultural and sensuous: In New York, when a fellow Indian immigrant hires Anju to work in his beauty salon, he observes approvingly that she "squats like only a third-worlder can, froglike for minutes on end, brushing tumbleweeds of black and hennaed hair into a dustpan." …. [T]he characters’ love for one another radiates off the pages. While recognizing the value of ambition, James also sees the rich comforts of knowing one’s place - especially when that place boasts banana trees and masala dosa.’ ( The New York Times Book Review)

What listeners say about Atlas of Unknowns