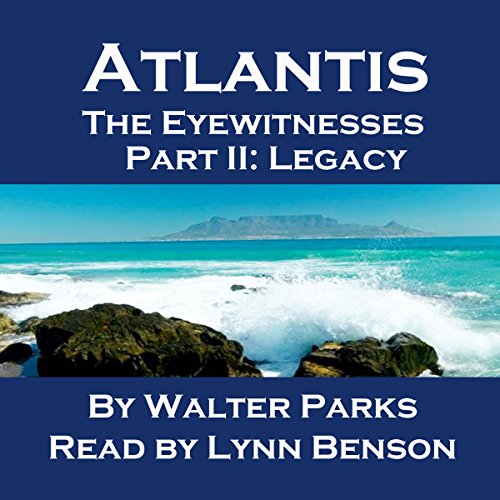 Atlantis The Eyewitnesses Part II: The Legacy of Atlantis

By: Walter Parks
Narrated by: Lynn Benson
Try for $0.00

Many have believed that Atlantis was a fiction created by Plato. Well Plato was not the first to write about it.

We have found a very much earlier document. It was written in 9619 BC, about 9,250 years before Plato's writing.

Further, we have assembled enough evidence in terms of archeological finds and scientific facts to provide convincing proof that Atlantis really did exist. And we have found the remains.

We structure the evidence to answers three basic questions: How was Atlantis created? Did it leave evidence or a legacy? How was it destroyed?

This audiobook is Part II.

What listeners say about Atlantis The Eyewitnesses Part II: The Legacy of Atlantis

This book would be best for someone who already knows something about Atlantis and enjoys the telling of all the details like how big the city was, where there were waterways and if the land was flat and mountains high and what did the buildings look like. If you can imagine much detail and keep it all in your head at once so that you can almost see the place in your mind, this would be good for you.

What could Walter Parks have done to make this a more enjoyable book for you?

Walter Parks may have a different intended audience. I am sure there are people who would love this book. He is largely quoting Plato about the description of the place in the first part of this book. I don't know if that is the way it is all the way through this book because I did not make it to the end.

This is the most monotoned reading I have ever heard. But the Lynn Benson would not have had much to go on. When you are reading descriptions of a place, on and on, how could you sound too excited?

What character would you cut from Atlantis The Eyewitnesses Part II: The Legacy of Atlantis?

I didn't get to the part where there were any characters.

This was one of the few books I was unable to finish.

I took the summary at face value. I should have looked up the author.

Had I done so it would have been obvious that the book exists not by virtue of any genuine interest in Atlantis as a topic, but rather it’s existence as just one more in a long list of myths and legends waiting to be sensationalised and sold to conspiracy theorists.

On a scale from Hancock to Cayce, this sits just on the other side of Cayce, only with less eloquence and a blatant but unsophisticated attempt to masquerade as reasoned logic rather than fanciful musings.

Nor can I accept that any weakness of logic here is in error. It leverages the same logical fallacies so consistently that it simply cannot be anything but dishonest and deliberate sensationalisation.

The structure is largely statement, analogy and conclusion. It is difficult to endure as the analogies are almost universally ridiculous and offer no support whatsoever for the equally ridiculous conclusions, and repeats this ad-nauseam for the entirety of the work.

To give but one example, it offers Plato’s account that the city had 1200 ships, compares that to the number of ships in the US Navy and uses that to suggest that Atlantis had the same military might then that America has today.

Making such an erroneous argument once would be merely amateurish and incompetent, but instead this is characteristic of the entire work.

The tragedy is that the initial statements often refer to something of interest, and a more honest discussion would often have been worthwhile.

I cannot say it is all drivel. A good chunk of it is instead a verbatim reproduction of Plato’s original works, and in sufficient volume as would be illegal for any material not in the public domain.

In summary, go read Plato’s Timaeus and Critias. There’s little here beyond that which is not deliberate misrepresentation.