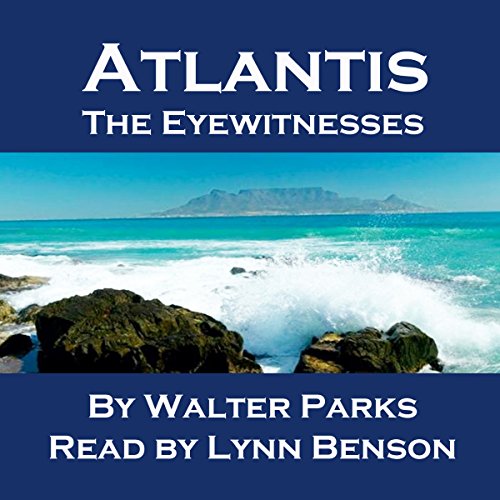 By: Walter Parks
Narrated by: Lynn Benson
Try for $0.00

Many have believed that Atlantis was a fiction created by Plato. Well Plato was not the first to write about it.

We have found a very much earlier document. It was written in 9619 BC, about 9,250 years before Plato's writing.

This ancient document is believed to be the oldest document that has survived almost intact down through the ages.

We structure the evidence that we found as answers to 3 basic questions. First, if Atlantis did exist how was it created?

If Atlantis existed, did it influence anything; leave any evidence of its existence; leave a legacy?

If Atlantis did exist where are its remains?

Read and you will become convinced.

What listeners say about Atlantis: The Eyewitnesses

Would you try another book written by Walter Parks or narrated by Lynn Benson?

As someone who wants to believe in Atlantis, I was very excited about downloading this book. The big problem for me is that he does not give a grain of real hard evidence to support his theory. The destruction of Atlantis is supposed to have occurred as a result of a inter-Stellar cataclysm. Bits of a Supernova came and entered our solar system and did havoc, knocking Pluto into its own orbit (it was Neptune's Moon) making Uranus spin in opposite directions, and on its way smashing into a planet that was apparently called Tiamat. This same bit of nastiness caused our seas to boil and lands to rise and sink. The problem is he does not present one shred of evidence other than mythological accounts of destruction. Could it be humans love a good disaster story? Without a disaster there can be no heroes, and humans love heroes as well.

There is plenty of hard evidence to suggest that nothing unusual happened, that the planet has been through at least 4 ice-ages with regular climatological changes occurring.

What really bugs me about this book is that the thrust of the story is based upon another author's work. DS Allan wrote 'Cataclysm' in 1997. It was his theory about the supernova explosion. But Walter Parks just briefly mentions his name in the preface but does not mention his book at all. Since he book is clearly the source he is using, that seems very bad manners!


Would you be willing to try another book from Walter Parks? Why or why not?