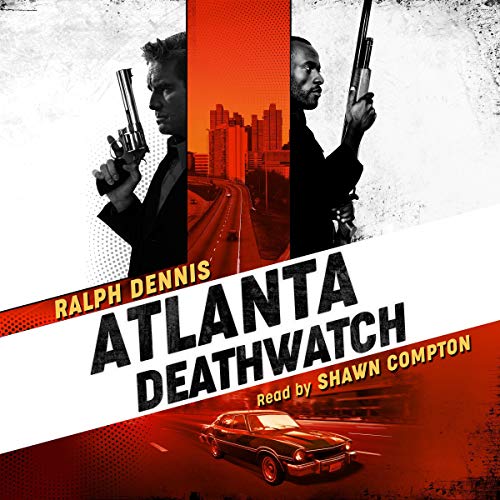 By: Ralph Dennis
Narrated by: Shawn Compton
Try for $0.00

The first novel in the unforgettable, long-lost series by Ralph Dennis is finally available…after being coveted for years by collectors of the very best in hard-boiled fiction.

Jim Hardman was a mediocre Atlanta cop until he was wrongly accused of corruption and thrown off the force. Now he works as an unlicensed PI, trouble-shooter, and bodyguard…often partnered with his drinking buddy Hump Evans, a black ex-NFL player who supports his playboy lifestyle by working as hired muscle.

Hardman is hired by The Man, a black mobster, to investigate the murder of his white girlfriend, a college student. It’s a case that plunges Hardman and Evans into the center of a violent street war that stretches from Atlanta’s seedy back alleys to the marbled corridors of power.

“His prose was muscular, swift and highly readable. Like Chandler and Hammett before him, Dennis was trying to do something different with what was thought of as throwaway literature.” (Joe R. Lansdale, from his introduction)

“The Hardman books are by far the best of the men’s action-adventure series.” (Mother Jones Magazine)

What listeners say about Atlanta Deathwatch

First in a Long Out-of-print Series

Show more
I received this from AudioBookBoom and the publisher, Brash Books, in exchange for an honest review.

Along with Charles Ardai's Hard Case Crime, Max Allan Collins' Brash Books is quickly becoming my go-to publisher for hard-boiled private eye/noir-styling mysteries. It doesn't matter the time-frame, with stories set in the 30s or in the 70s, it's all been very good.

This one, the first in the long-out-of-print Hardman series by Ralph Dennis, was a lot of fun. Complete with disgraced down-on-his-luck private eye Jim Hardman, his strong-arm sidekick Hump, and his on-again/off-again girlfriend, this seemed to check all the required boxes for a plot set in 1970s Atlanta, with corrupt city officials, black mafia, "innocent" young ladies, and a plot straight out of the times.

The narrator did an outstanding job in capturing the tone and the voices, and there was no confusing over who was talking.

While I will definitely be looking for the rest of the series on audiobooks as they are released over the coming months, I will say that some will find the inherent racism quite shocking. For those that are easily offended, this series is definitely NOT for you. If you can get past all of that, and there is quite a bit, then expect an entertaining read/listen

This book was first published in the 1970's and has the vernacular of that time. It is a really well written book with great characters and a very good mystery -- think Phillip Marlowe and Sam Spade type hard-boiled detective stories. The author, Ralph Dennis, was never a household name for this series as the books were marketed as cheap men's adventure schlock and quickly disappeared from book stores. However, many crime novelists, including Lee Goldberg [screenwriter of Monk among other shows and writer of True Fiction], have espoused how these books have influenced their writing and Dennis should have been acclaimed with the likes of Raymond Chandler. Now, Brash Books has republished the series.

Jim Hardman is a former cop, who was forced to resign from the police in a corruption scandal, who now works as an unlicensed PI with his friend Hump. Hump is a former NFL player who serves mostly as the muscle in Hardman's operations. As Hardman puts it, he considers Hump a friend but doesn't know if Hump feels the same way. Hardman is initially hired to follow a college student who has gotten involved with the wrong crowd but he is dissuaded from continuing after being beat up. Soon, the college student is murdered and Hardman is back on the case but the investigation quickly escalates as more people, including a cop, are killed. This is a fast paced novel with plenty of twists and good humor. What's great is that you get to figure out the mystery with Hardman, as he shares his thoughts on what he finds and Hump occasionally throws in his two cents. Additionally, it's interesting how Hardman, a former cop, keeps one foot on the side of the law and the other in the world of crime and is equally deft in each.

The narrator, Shawn Compton, has a great voice for this novel - the perfect amount of cool and slickness but mixed with a bit of grit.

Atlanta Deathwatch: Hardman, Book 1.. As an audio book this is great entertainment. It is a gripping tale set in the 70's , strong characters and plot.
A Great read - you won't want to put it down..
I was given a free copy of this audiobook at my own request, and voluntarily leave this review.

Scratches that 70s action itch. Joe Lansdale has acknowledged it as an influence on Hap and Leonard. Caveat: the book doesn't have the best portrayal of black characters. The narrative is constantly saying things like, "the black with the shotgun" for example. And the #2 character, Hump (the Leonard of the duo) runs awfully close to the "black buck" stereotype for much of the first half of the book (his main narrative action is sex and violence). The publisher's note says in part, "...reflects the cultural and sexual attitudes, language, and politics of the period" which is fair up to a point. If you look at racial presentations in contemporaneous crime fiction, specifically the works of Elmore Leonard, you don't find the same language or characterizations. It does work as a piece of action oriented, 70s hardboiled crime fiction but that caveat stood out.

This series is billed as "men's action" which often means grisly violence, poor plotting, and an over-emphasis on sexual encounters that borders on the type of pornographic literature one would expect to find in so-called men's magazines. However, it as a pleasant surprise to find a series that reminded me of nothing so much as Parker's Spenser for Hire series. The relationship between former cop and unlicensed private investigator Hardman and his pal, Hump, a former NFL player, was very reflective of the relationship between Spenser and Hawk in that series. Further, Mr. Dennis also likes to reflect on cooking and meals in a less irritating frequency than that of the Spenser novels.

What makes this book more interesting is an actual mystery. It is written using 70's language and therefore limited to 70's technology (phones) and also utilizes some negative racial attitudes of the period. The mystery is well-plotted and keeps the reader guessing nearly to the end. Hardman seems to rely heavily on his old police buddy network, often refusing to share information with them. The detective work is hard work. It is following one lead at a time and seeing where the trail leads and Hardman and Hump handle it rather well. Hardman is no sissy boy, but neither is he a character who is willing to risk his life needlessly.

The one thing I didn't like is that one point Hardman and Hump act as drug mules--- semi-consistent with some of the 70's thought that drugs weren't hurting anybody important-- that it was a problem for the inner cities.

The presentation for this audio adaption was very well done. I never felt the reader was mispronouncing words or going too far with dramatization so that the material seemed melodramatic. The accents and voices he chose to use fit the story and the setting perfectly. This was a fine dramatization.

The narrator made this book come alive. The story line was good and believable. I loved how the two main characters worked together.

This novel features an Atlanta disgraced ex cop Jim Hardman, now working as a private detective, hired by a white business man to follow his daughter Emily Campbell. To supplement his income, Hardman occasionally runs contraband with a friend and ex NFL player Hump Evans, from new York to Atlanta. Originally written in 1974, the story is refreshingly lacking all the modern technologies like smart phones, computers and the internet, making it a bit of a nostalgic read. Emily Campbell, now in her second year, is distracted and not doing nearly as well as she has in the past and her dad wants to know why. Hardman tails her to a "blacks only" bar and peeking through the window sees that she is the only white person in the bar and no one is paying any attention to her. Soon Emily ends up dead and Hardman is hired by Emily's lover and mob boss, "The Man" to find out who killed her. Working with Hump, and somewhat with his ex partner from the police force to solve the case, Hardman finds himself a target of a hitman along with the Mob Boss. Fast paced action and good character and plot development. An excellent job of narration as well.I was given this free review copy audio book at my request and have voluntarily left this review

Even though this book is dated, it was a great listen!

I loved the two main bad/good guys, Jim Hardman, the ex-cop and Hump, the ex-jock. They had some rough edges and quite a few issues but I rooted for them anyway.

This book was more crime thriller than mystery. It was very well-written and very well narrated.

If you can get past the racism and the misogyny, you will be well-rewarded.