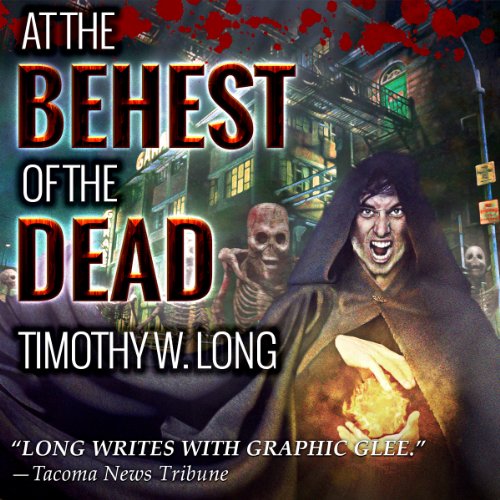 At the Behest of the Dead

By: Timothy W. Long
Narrated by: Todd Menesses
Try for $0.00

Phineas Cavanaugh likes to play with dead things. As a centuries-old necromancer he is Seattle's foremost investigator on the recently deceased, and he hasn't met a corpse he didn't like.

Hired to track down a serial killer, Phineas and beautiful Detective Andrews face off against an enraged beast that should not exist. Things go from bad to worse when is summoned to probe the murder of his teacher and oldest friend.

Phineas learns the hard way that the two cases are related when a demonic force attempts to devour him. Now, if he is to survive the night, he will have to join forces with his former flame, a witch named Glenda; Frank, a Native American changer, and a snarky demon - who may or may not be - under Phineas's thrall.

With the power over the dead at his command, Phineas' destiny leads to a showdown in Hell, where the price of failure may be his soul, and nothing less than the very Earth itself.

What listeners say about At the Behest of the Dead

Ghost Busters and Beyond

This was out of my comfort zone of cozy mysteries but I did enjoy it a lot. I had a lot of laughs with some great one liners and funny dialog, Phineas, is the go to person for solving murders, rogue shape shifters and other creatures of the darkness. Someone has gone to a lot of trouble to set him up to come against some of the strongest demons around. Phineas is ages old and had a lot of experience but even he may not be able to defeat the worst of the worse.
The narrator Todd Menesses, was truly wonderful and knows how to keep the excitement going.

First thoughts about the cover of At the Behest of the Dead? Ohh… Spooky. I dig the eerie feel of the building in the background. The skeleton lurching towards the man with the ball of fire is very creeptastic. Shivery and spooky.

The main character in this story is Phineas Cavanaugh. He’s a really old (He looks about thirty though.) Warlock Necromancer. He seems to get himself into danger rather easily. Almost as if the danger clings to him. He underestimates his own talents, and thereby having others around him underestimate them as well. He’s kick-ass in a magic fight. Fair warning – His wit and sarcasm will randomly have you giggling like a loon.

My favorite character in this story, besides Phineas, is a male demon in a female Pomeranian host named Peaches. Peaches is a very good bad little demon dog that you cannot help but want to pet. Peaches’ voice always makes me smile. Think guttural, scathingly deep, nails on chalkboard and you’ll have Peaches’ voice.

The Narrator is Todd Menesses. I loved the voices used in this book. Phineas has an English accent, even in his own thoughts. There are lots of different characters in this story and Todd Menesses very convincingly brings each of them to life with their very own voices. That is an awesome talent to have. The Author is Timothy W. Long. This book is 10 hours and 10 minutes long.

I greatly enjoyed this book and would recommend it to mid-teen and up. I say mid-teen and up because there is a bit of blood, terror, and different things that go bump in the night, and vivid details of things about the occult to keep the story juicy. It keeps you guessing at the next bit of trouble Phineas will find himself into.

This book left me with the impression that anything is possible given enough belief and a bit of bravado to back it up. Do not let others tell you that you are wrong and should give up. Remember that knowledge, sarcasm, and faith are their own versions of magic and can be used for both the greater goods or the worst evils a person can imagine.

Very good listen. It was funny and plenty of action. I liked the narrator for the most part. I'll be getting the next in the series the day it comes out.

Great story. Fast paced, no boring parts. Good use of magical ideas/fantasy.
Fantastic elements and powers to listen about.