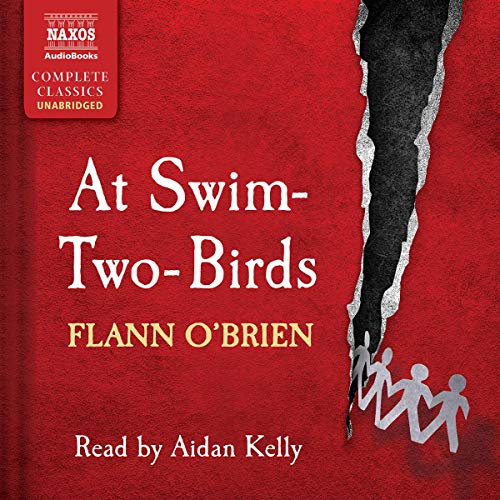 More preoccupied with drinking, sleeping, and writing, an unnamed student neglects his studies and invents three separate openings for a novel. The first introduces the Pooka MacPhellimey, "a member of the devil class", the second involves Mr. John Furriskey, a character belonging to another of the student's creations (writer Dermot Trellis), while the final opening features legendary Irish heroes Finn Mac Cool and Mad King Sweeny. Soon, Trellis' creations rebel against him, doing as they like while he sleeps, and the characters from each story begin wandering in and out of each other's tales.

Published in 1939, At Swim-Two-Birds is a madcap exploration of Irish literature and mythology and the unending possibilities of fiction.

What listeners say about At Swim-Two-Birds

"Evil is even, truth is an odd number, and death is a full stop."
- Flann O'Brien, At Swim-Two-Birds

First, this is one of my favorite recent novels. I loved it. I loved its playfulness, originality, energy, discursiveness, absurdity. I loved the fugues of dialogue, the interruptions, insertions, the confusion of characters, the meta-fiction of youth. There were parts where I was quoting or reciting paragraphs, lines and poems from almost every page to my wife. Except with the poems, this proved difficult because there was seldom a break of coherence where I could explain exactly where we were, how we got there, or give her anything more than a vague sense of what exactly was happening. I felt validated after telling my wife that it felt like a mash-up between Joyce, Beckett, and Sterne.

Now, I've read O'Brien before, so my effusive love of this book didn't come as a complete shock because I also adored The Third Policeman. But still. Americans seem to be fantastic at making money and blowing shit up, but the IRISH can write. They may not be able to be psychoanalyzed, but dammit that mad clack of humans can scrib.

Flann O'Brien is one of the least celebrated best irish authors to ever to pen to paper. I hope all of his books make it Audible.com.

I just wish I had read (listened to) this earlier

My Dad urged me, for years and years, to read At Swim-Two-Birds. I just never got round to it.
He passed away two months ago... I had to read it.
This is up there with the best I have read....genuinely laugh out loud funny in parts
I just wish I had read it before he passed...

50 years since i first read this. Listening to it now, it's still great. Still don't fully understand it.

I read this book a couple of times as a young man. 30 years on, I eared it here, and I’ll do so again.
There are times I think O’Brien was using words for the sake of themselves, and I suppose he was. There is a poetry and rhythm throughout which, as a Dubliner, I appreciated even more by hearing it.

Amazing narration makes a challenging masterpiece very assimilable. The characters are easily identifiable, true to the style, and are performed with the cadence of a theatrical performance.