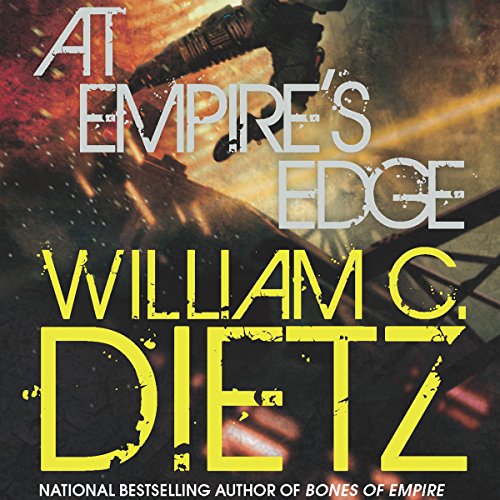 In a far-distant future, the Uman Empire has spread to the stars and beyond, conquering and colonizing worlds, ruling with a benevolent - but iron - fist. The Pax Umana reigns, and all is well. But on one planet, the remnants of a violent, shape-shifting race called the Sagathis are confined, kept captive by xeno-cops, who have been bio-engineered to be able to see through their guises. Still, sometimes one manages to escape. Zak Cato is a xeno-cop. He's returning a fugitive Sagathi when things go horribly wrong. Cato - the only survivor after the rest of his men are slaughtered - must now figure out who betrayed them and bring the alien in, whatever the cost.

What listeners say about At Empire's Edge

Having read the majority of this author's books I was surprised to read one person's review as "dull and predictable". I found the book neither. It was as enjoyable as his 'legion of the damned' series and his 'earth rise' series. If you are already a dietz fan you will not be dissappointed.

The story is standard sci fi. Futuristic cop chasing shapeshifter criminal with murder conspiracy, politics, etc. Not that most people mind that.

I couldn't give it below 4 stars for despite the predictable plot, as it is reasonably written and is well paced. Of course, I like sci fi and it had all the sci fi elements, with winged villains and what not.

If you like action/adventure with your Sci Fi, then this is for you. A few cliches in the main character, but very listenable. Narration is good.

Not really what I expected. But it was a pleasure to listen to this story. Reminiscent of the western genre in it's simplicity (hero chasing the outlaw).

Complex characters...such a the blood thirsty monster - with a heart.

Would you ever listen to anything by William C. Dietz again?

Hard to tell how to share the blame between the author and narrator but the narrator is at the very least guilty of performing the book.

Not the absolute worst but it ranks way down there.

I have three words for this one: Dull, Duller, & Dullest. I'm not sure how it'd be reading it, but listening to this dreary read read this dreary book was a torture. I kept having to back & & replay because my attention wandered, & then I'd rapidly lose attention again. I just now had to read the description of the book to remind myself what it was about; I finished it yesterday but already couldn't remember anything about it. The characters wooden, the plot unimpressive, I found myself wishing they'd all get slaughtered just to end it. The shapeshifter was the only interesting thing, & the love story between Cato & Alomie (sp?) ridiculous. btw, the 2 female main characters were named "Alomie" & "Nalomie." I don't know how they're spelled in the book, but they sound so much the same that 1/2 the time I didn't know whether to root for the owman or hope she got killed right away. I kept waiting for a plot device wherein the similarity would be important: i.e. a reason for it. Nope. Just lack of inventiveness, apparently! Waste. Of. A. Credit.