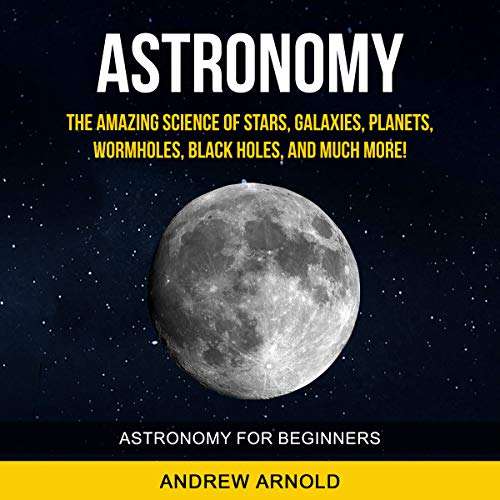 Astronomy: The Amazing Science of Stars, Galaxies, Planets, Wormholes, Blackholes and Much More

Astronomy: The Amazing Science of Stars, Galaxies, Planets, Wormholes, Blackholes and Much More

The beginners guide to everything you need to know about astronomy! Worm holes, black holes, and new galaxies!

The night sky provides a beautiful show every night, but it leads to questions about how those stars, planets, and a host of other objects were created and how they influence each other.

Astronomy is the study of the space and all of its amazing moving parts. The study of space, in particular its stars and planets, has a long history, both of assisting farmers to know when it was time to plant and keeping seafaring travelers on the right longitude.

This audiobook contains information about what is really up there, based on research by renowned ancient and present-day astronomers who were as fascinated by the sky as you are. Some of them spent their whole lives studying the sky bodies and the universe! If you have given up on astronomy, it's probably due to misguided information and dead ends; this is your chance to start a successful journey of discovery!

Was the narrator drunk?

Very sloppy narration. He mispronounced astronomy (as well as many other words) several times. Had to stop listening less than halfway through because I couldn't take all the mispronunciations and monotone speaking.

It's great because it's simplistic

I got this book to share facts regarding astronomy with my grandsons that are right into it. Myself, always living astronomy, caught up on new discoveries, missions, & information. For anybody with the slightest bit of curiosity this book is for you. It is most certainly a mind bender but it is also, in waves of realization, an eye opener. I usually read just for entertainment but this book was that as well.

An excellent guide for observational astronomy

This is a great book on how to get the most out of your observing experience. If you are someone who wants to get outside and see this wonderful universe for yourself then this is the book you want. I found this to an very interesting and engaging introduction to the results of the scientific work in archaeoastronomy.

This is a great read. While it is written mostly as a college text, it is NOT a dry, statistic filled, mess as some science texts I have read. It is truly an enjoyable read. This book is also great for students who want to learn more or anyone who has a thirst for learning! You really have to check it out for yourself!

Packed with interesting and insightful information

I got this book to go along with my brand new Meade telescope, and boy was I impressed! I decided to read the book first rather than just bounce back and fourth! It is very interesting and I learned a few new things I've always loved science it just fascinates me. Each topic is covered on high level, but written clearly using simple terminology.

It's astronomy for everyone and a browser's deligh

I've been fascinated by the stars and the night sky. With that said, I still consider myself to be a beginner. Only recently have I begun actually looking more closely at the stars (thanks to my recently delivered telescope) and reading more about them. Since I've become more hungry for knowledge, I love astronomy that much more.

I got this audiobook for my fiance who is in love with stars. this book goes over on great details about the stars galaxies and everything in the skies. I got it to remind myself of the basic teachings of astronomy beacuse I lost my memory on this subject and I love to read stuff on this subject.