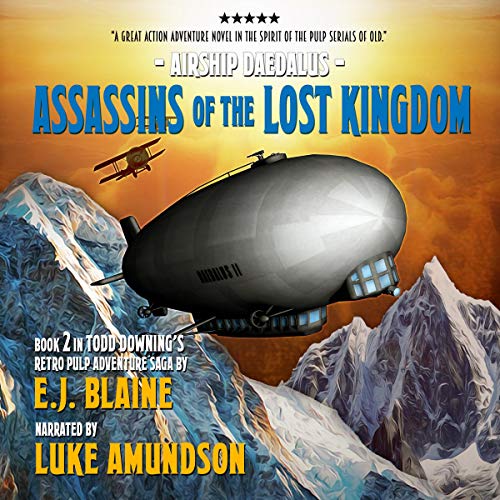 Assassins of the Lost Kingdom

July, 1926 finds ace pilot Jack McGraw and scientist Dorothy “Doc” Starr, hot on the trail of evil agents murdering prominent captains of industry - a trail that leads them to face an old enemy they thought vanquished. With the backing of Thomas Edison's A.E.G.I.S. foundation, Jack and Doc use their light reconnaissance airship Daedalus to travel to the Himalayas, where a deeper mystery unfolds. Together with their crewmates, suave English radioman Edward “Duke” Willis, curmudgeonly Bronx mechanic Carl “Rivets” Holloway and laconic Cherokee sharpshooter Charlie “Deadeye” Dalton, they delve into local customs and ancient lore surrounding the “Eye of the World”, a hidden kingdom in the heart of the mountains known as Shambala, where the only antidote to the world's deadliest poison still grows wild.

Based on the Airship Daedalus retro pulp comic strip by Todd Downing and Brian Beardsley, Assassins of the Lost Kingdom is the first novel from author E.J. Blaine, who brings the fun and excitement of classic adventure stories to the fore. Mobsters, mad science, secret societies, occult threats, and lost worlds meet globe-trotting, sky-high aerial adventure and two-fisted heroism, like the pulp novels of old!

"Airship Daedalus: Assassins of the Lost Kingdom has everything you'd hope for in a pulp adventure. Crafted in the mold of its predecessors from the 1920s, the book has a bit of everything. Adventure, intrigue, danger - and most of all, atmosphere. I'd recommend it to fans looking for hints of late-era steampunk, 1920s pulp adventures, Indiana Jones, or just people looking for a fun, fast adventure." (Jeffrey Cook, author of the Dawn of Steam Trilogy)

What listeners say about Assassins of the Lost Kingdom

As the headline suggests, this story moves along at a fast pace. The narration is excellent, I love the different voices and the pacing during action scenes. When the story gets exciting, the narration adds an element of excitement and speeds up to match. Well done!

Love this series! This second story is every bit as good as the first. Very well written and performed. Can't wait for the next story to be added to audible! Happy listening!

I can’t wait for Book 3 to be available!

While Book 1 felt like intimate character development within the context of a very fun story. Book 2 was non-stop adventure. I absolutely love the ideas that weave in and out of this story... The hidden realm, the magic of plants (for better and worse), enlightenment, surprise allies, and of course that the good guys keep winning. I didn’t want it to stop. I can’t wait for Book 3 now.