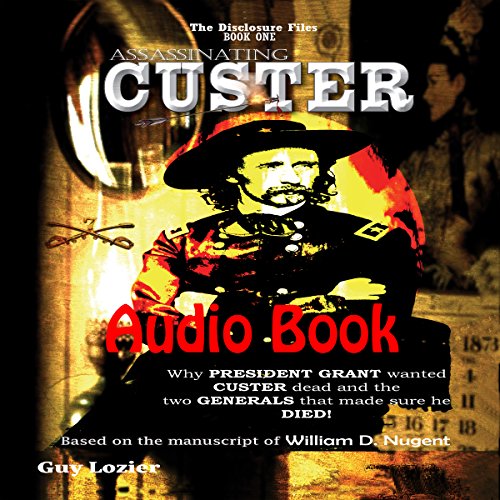 By: Guy Lozier
Narrated by: Michael Kinzie
Try for $0.00

Assassinating Custer is book one of the Disclosure Files. Based on the never-before-published manuscript of William D. Nugent, who fought and survived the Battle of Little Bighorn.

Did President Grant's administration funnel repeating rifles to the Indians to set up a false flag event?

Did General Sheridan order General Terry to stop preventing miners from sneaking onto Indian lands to mine gold?

Did General Crook purposely attack peaceful Cheyenne Indians to stir them up?

Were there meetings in the White House to plan a secret war?

Was President Grant's administration considered the most corrupt of the 19th century?

Why did General Custer testify against President Grant's brother?

Why did President Grant's son call General Custer a liar in the press?

Did President Grant send geologists onto Indian land illegally to search for gold?

Did General Terry withhold information from General Custer about the size of the forces of the Indians at Little Bighorn?

Why did Captain Benteen refuse to follow his orders given to him by General Custer concerning the Battle of Little Bighorn?

Why did Major Reno refuse to follow his orders given to him by General Custer concerning the Battle of Little Bighorn?

Why did General Terry, General Crook, Major Reno, and Captain Benteen lie about the Battle of Little Bighorn?

Why did General Crook not show up as planned for the Battle of Little Bighorn and then lie about it?

Why did General Terry withhold his forces from the Battle of Little Bighorn while Major Reno and Captain Benteen were fighting for their lives?

Did General Custer have two sons?

Was one of General Custer's wives and one of his sons at the Battle of Little Bighorn?

Did General Custer shoot at one of his own scouts on purpose right as the Battle of Little Bighorn started?

Did General Custer free an Indian woman from one of his scouts who was about to rape and kill her right before the Battle of Little Bighorn started?

All these questions and more are discussed in the novel....

What listeners say about Assassinating Custer

This book is a bit conspiracy theory, sci-fi, historical fiction, with a little of true facts thrown in. I had hoped for more factual history, but when I let go of my

original expectations it became an adventure for me. I kept listening to see where this would end.

The narration was well done. The characters were well portrayed. Michael Kinzie's voice was pleasant to listen to.

While the idea of mixing genres might have sounded appealing at first, it quickly dissipates as this book descends into a spiral of nonsense. First of all, the purported Custer story accounts for perhaps less than a quarter of the time (the only reason I even chose it). The bulk of the book is spent either on a science fiction thread, which is not as cute as it thinks, or a conspiracy thread, which is not as clever or sardonic as it thinks. Which leads to a bizarre apologia of Custer as a victim of political mind control, which is untenable at best, even for a work of historical fiction. But what's worse, even though I'm almost certain it wasn't the intention of the author, it essentially gives a back of the hand to the Lakota, Arapaho and Cheyenne, who presumably could never have defeated the 7th Cavalry but for the evil machinations of Ulysses Grant. I'll give it two stars because sci-fi fans might like parts, and conspiracy folks will enjoy some of it, and a decent bit of the true history is essentially on point. It's just not that cohesive a piece though.

This is an expertly blended mix of fact and fiction that will hold your attention throughout.