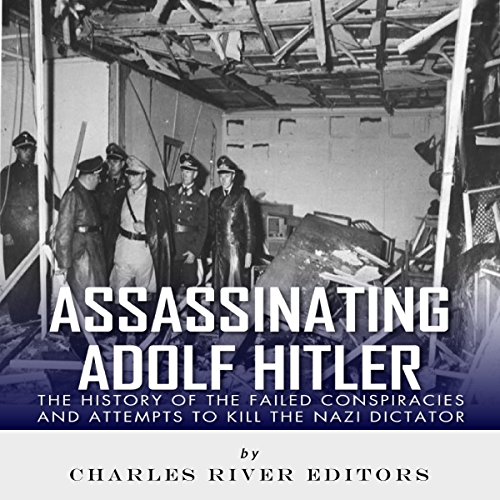 The History of the Failed Conspiracies and Attempts to Kill the Nazi Dictator
By: Charles River Editors
Narrated by: Ken Teutsch
Length: 1 hr and 40 mins
Categories: History, 20th Century
5 out of 5 stars 5.0 (1 rating)

Like other totalitarian leaders, Adolf Hitler kept an iron grip on power in part by making sure nobody else could attain too much of it, leading to purges of high-ranking officials in the Nazi party. Of these purges, the most notorious was the Night of the Long Knives, a purge in the summer of 1934 that came about when Hitler ordered the surprise executions of several dozen leaders of the SA. Nonetheless, for the most part Hitler enjoyed great popularity among both the members of the Wehrmacht and ordinary Germans during his rule over the Third Reich between 1934 and 1945. To many, he appeared to be the spirit of a revived, powerful Germany, shaking off the hardship and humiliation imprudently inflicted by the victorious western Allies at the end of World War I. His strangely magnetic, ranting speeches struck a chord with millions, creating iron loyalty in many of those who followed the commands of his dictatorship.

From the very beginning, however, others held a different view of the newly constituted Third Reich's Fuhrer. Though the concept of tyrannicide remained so foreign to German culture that the word only appeared in the national language after World War II, as the war progressed and Germany's fortunes faltered, more individuals and groups plotted the death of Hitler.

The climax of these efforts took place on July 20th, 1944, but Hitler himself recognized his eminence and notoriety as factors making him the target of assassination attempts years earlier. Though his own stated figure of seven attempts to kill him falls on the low end of the actual number of quietly thwarted plots, the Fuhrer knew he was a target and deliberately acted in an elusive fashion.

Most assassination schemes against the German dictator centered on the use of bombs to kill him. Such attacks, of course, theoretically increased the chances of killing Hitler, since a blast would create a far larger "fatal area" than a bullet or even a spray of bullets from a submachine gun. Additionally, the bomb's user need not directly risk his own life or figure out a way to get through Hitler's security, which necessarily watched most closely for human threats rather than completely hidden objects. A few would-be assassins planned a more direct approach, prepared to sacrifice their lives shooting the Fuhrer point blank. Siegfried Knappe, a Wehrmacht major attached to Hitler's bunker staff in the final days in Berlin, expected (incorrectly) that the Russians would execute him and therefore nearly decided to shoot Hitler down with his service pistol. Only the thought that his action would birth a new "stab in the back" legend restrained him.

Through it all, Hitler eluded many of the attempts on his life without ever realizing his risk. Most plotters escaped undetected, baffled by the randomness and secretive nature of Hitler's movements. The Fuhrer frequently canceled prearranged engagements, arrived at other locations with only a few minutes' advance notice, used different trains than originally planned, and generally proved constantly unpredictable. When Hitler traveled by air, he not only brought a detachment of fanatical SS guards, but also highly trusted personal physicians and cooks, and his own personal car, the latter armored and already thoroughly checked for sabotage and booby traps.

Beyond all his precautions, the Fuhrer sometimes almost appeared protected by incredible - or uncanny - luck. Despite the enmity of the world and the increasingly violent opposition of his own officers, the Third Reich's leader lived until he chose to die, as though destined by some dark fate to perish only by his own hand.