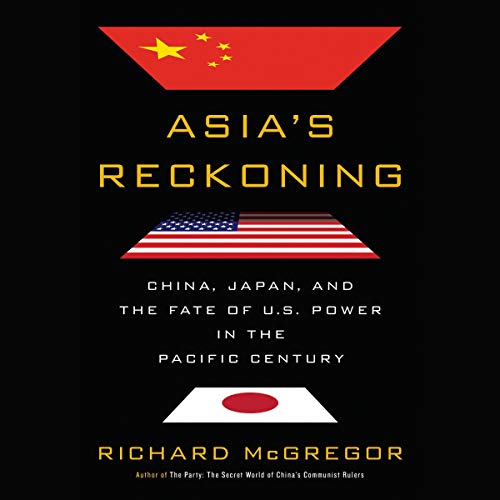 By: Richard Mcgregor
Narrated by: Steve West
Try for $0.00

A history of the combative military, diplomatic, and economic relations among China, Japan, and the United States since the 1970s - and the potential crisis that awaits them.

Richard McGregor's Asia's Reckoning is a compelling account of the widening geopolitical cracks in a region that has flourished under an American security umbrella for more than half a century. The toxic rivalry between China and Japan, two Asian giants consumed with endless history wars and ruled by entrenched political dynasties, is threatening to upend the peace underwritten by Pax Americana since World War II. Combined with Donald Trump's disdain for America's old alliances and China's own regional ambitions, East Asia is entering a new era of instability and conflict. If the United States laid the postwar foundations for modern Asia, now the anchor of the global economy, Asia's Reckoning reveals how that structure is falling apart.

With unrivaled access to archives in the United States and Asia, as well as to many of the major players in all three countries, Richard McGregor has written a tale that blends the tectonic shifts in diplomacy with bitter domestic politics and the personalities driving them. It is a story not only of an overstretched America but also of the rise and fall and rise of the great powers of Asia. The about-turn of Japan - from a colossus seemingly poised for world domination to a nation in inexorable decline in the space of two decades - has few parallels in modern history, as does the rapid rise of China - a country whose military is now larger than those of Japan, South Korea, Taiwan and Southeast Asia's combined.

The confrontational course on which China and Japan are set is no simple spat between neighbors: the United States would be involved on the side of Japan in any military conflict between the two countries. The fallout would be an economic tsunami, affecting manufacturing centers, trade routes, and political capitals on every continent. Richard McGregor's book takes us behind the headlines of his years reporting as the Financial Times' Beijing and Washington bureau chief to show how American power will stand or fall on its ability to hold its ground in Asia.

"The United States, China, and Japan form the power triangle that will shape much of the international politics in the 21st century. Richard McGregor's masterful The Party illuminated one corner of that triangle - China. In this important book, he describes how the other two corners have interacted with China since World War II. Lucid, insightful, and ominous, as the author describes big trouble ahead." (Eliot Cohen, author of Supreme Command)
"McGregor distills years of meetings with high officials in China and Japan to give a vivid nuanced picture of their relations in the 21st century." (Ezra Vogel, author of Deng Xiaoping and the Transformation of China)

What listeners say about Asia's Reckoning

He USA not only reproduces itself, unlike just about everyone else, we can recrueit more then we need. China has already started to deably evaporate from the bottom up.

China is little more then a blustering stage set. I think they even gave up building a replica Boing 707, or whatever the thing really is. Four years ago I could find it on line. Perhaps its still ther someplace.

I could not listen more than half an hour, in spite of wanting very much to hear the book. the narrator monotonously uses the same tonal structure on every sentence. no variety. no emphasis. it became grating

A wide ranging examination that sifts through decades of minutiae to present you with a clear and interesting storyline.

I really liked the recent historical summary which. Mcgregor provided. An Excellent primer for Trump.

For some reason this author just couldn't stick to what took over 15 hours of talking in a near monotone, blasé speech style reading. It was like listening to someone read the dictionary and mispronouncing many words. Then in the final few minutes of the afterward,. This author decides to throw on so,emTrump bashing since Trump wants to make better trade deals for the USA instead of continuing to let China and Japan build EVERYTHING!! He mentioned how Trump was upset at all the Japanese auto imports. Sad to say this has been true for decades since American auto worker unions got too much money time and time again. Can anyone tell me when ANY UNION went on strike since before the turn of the cent??

American businesses GAVE AWAY AMERICAN JOBS BECAUSE THE QUALITY IN THE 1980s had become garbage. Japan produced MUCH better vehicles for the same or less money. And for those of us who wanted to buy American and bought garbage only to get no help with the Lemon Laws. We the people had no choice but to buy Japanese imports. Now, everything has switched from Japan to China. China has NO law against copyright violations and the ONLY REASON China has become so powerful in the world market is because American businesses made deals there to build OUR products cheaper and lobbied to keep import taxes low incoming. While export taxes from USA to China are too high for the Chinese people to buy OUR products. Same goes for Japan and Korea.

Even in Japan they get our steak for less than we do, but they don't even want it. Supposedly Kobe beef is the best in the world? Huh? Gee, Angus beef was the best when I was growing up. Did cattlemen forget how to grow cows too?!?! Honestly, I hope someone in charge of this country decides to finally put and end to EVERYTHING! Not by bombs or wars. But by closing our borders. Kicking out ALL illegals regardless of origin. And go back to isolationist behavior! It's insane, but it will take something this drastic to have ANY chance at getting the USA back on top in the world. Stop sending aide to other countries and spend all those resources HERE to fix THIS country's problems! Stop fighting for other countries who never fight for us! Buy back our country from China, Japan, and the Arab Empirate then become the ONLY 100% SELF CONTAINED COUNTRY IN THE WORLD. No other country COULD do this, but America can. Then bring salaries and prices of EVERYTHING in line so that within ONE decade. A SINGLE INCOME family can exist again. This will also bring back the middle class that has been nearly wiped out since Clinton, Bush, & Obama!

And for gods sake...GET RID OF POLITICAL CORRECTNESS BULLSHIT...HOMOSEXUAL BRAINWASHING BY THE MEDIA...SPANISH LANGUAGE ON ANY PRODUCT NOT SPECIALIZED FOR THE SPANISH. NO MORE SPANISH DRIVING TESTS OR PUSHING BUTTONS FOR ENGLISH...PUT THE EDUCATIONAL STANDARDS BACK TO WHERE THEY WERE IN THE 1970s BEFORE THEY WERE LOWERED TO PUSH THROUGH CHILDREN NOT SMART ENOUGH TO LEARN. HABE BETTER TEACHERS BY GIVING THEM BETTER PAY BASED ON GRADE SCORES AND NATIONAL TEST SCORES...STOP ALLOWING COMPUTERS IN CLASSROOMS EXCEPT TO TEACH ABOUT THEM...STOP ALL MEDIA DEVICES TO THOSE UNDER THE AGE OF 21...LOWER LEGAL DRINKING AGE BACK TO 18 OR INCREASE THE LEGAL AGE TO DRIVE OR SERVE IN THE MILITARY TO 21.

Just a few of what needs to happen if this country is ever 'To be great again' as promised. And if you don't like this country, can't speak its native language, etc. GET OUT AND GO ELSEWHERE. I SUGGEST GOING BACK TO CUBA, MEXICO, AFRICA, INDIA, CHINA, JAPAN, AND ALL COUNTRIES IN THE MIDDLE EAST REGION. Which essentially is Africa, but who ever thinks that? Last thing which has been bothering me all my life just as something quite strange. Can somebody please explain to me when someone of Jewish faith is asked their nationality, they say they are Jewish? Judaism is NOT a nationality, but a religious belief and doctrine. Jewish people come from nearly every country and nationality on the planet. So what's with Jewish as a nationality? Is there a country called 'JEW' I've not been aware all these years? I know Israel wasn't a recognized country until AFTER WWII when the USA and its allies made it an official country for military strategic purposes in a hostile area of Northern Africa.

So let the haters begin sending me hate mail! But deep down...ya know I'm correct 100% across the board on all topics mentioned.