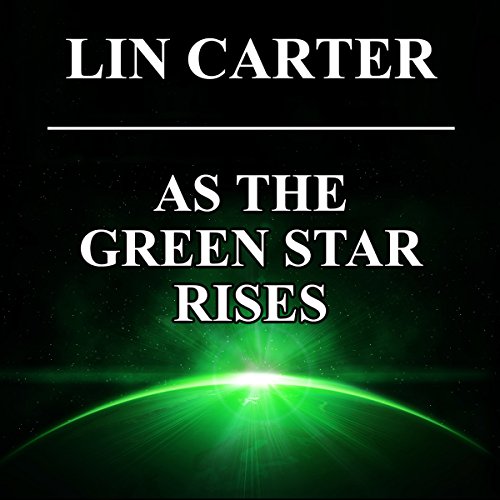 As the Green Star Rises

What listeners say about As the Green Star Rises

Will what's his name ever find the princess?

I picked up As the Green Star Rises, fourth in the five-book GREEN STAR series by Lin Carter, only because it was cheap at Audible. The last book, By the Light of the Green Star, was mildly entertaining but I didn’t feel compelled to go on. (At this point, probably nobody is reading further in this review, but for the sake of a sense of closure, I’ll go on just a bit. After all, it is possible that readers looking for a mindless audio adventure series might be enjoying GREEN STAR.)

In As the Green Star Rises, our hero (gosh, I forgot his name), who has been blinded and separated from his friends and the princess he loves, is pulled out of the sea by pirates and turned into a galley slave. He makes new friends and enemies and pines for his lost princess. A string of various adventures occurs: daring escapes, near drownings, unexpected rescues, encounters with frightening animal life and weird pseudo-human races, etc. Some of it we’ve seen before.

This installment simply feels like a stepping stone from book three to book five. I feel like Lin Carter is dragging us around, making up little side-adventures, just to prolong the romantic tension: Will our hero ever find the princess, will she know him, and will she love him? I’m sure. Because nothing seriously bad ever happens to our hero. Every other page he is sure he’s going to die, but then some amazing miraculous event occurs which saves him. I see how it is.

Some of Lin Carter’s plot, when not repetitive, is actually creative and slightly exciting, though I never felt the urgency and danger of it. Some of it is just silly, such as the tiny knife called “The Avenger of Chastity” which noblewomen have sewn into their intimate undergarments. If a woman is forced to suffer “the ultimate indignity” she “unsheathes this hidden blade with a ritual gesture and sheaths it again in her own heart.” I snickered at this and wondered how long she practiced the “ritual gesture.”

Lin Carter’s writing style is also a bit silly. This tale is so low-brow, yet if there’s a big word that can do half the job of a more perfect small word, Lin Carter will choose it. For me, this added to the entertainment, though I’m sure that wasn’t Carter’s intention.

There’s another cliffhanger at the end of As the Green Star Rises. I actually have book five, the final GREEN STAR book, because it was also cheap when I bought book four. It’s been a month or two and I haven’t started it, but I will eventually simply because I bought it, it’s short, and it’ll be nice to be able to review the entire series. I feel like I already know what’s going to happen, though.

I’m listening to GREEN STAR in audio format, narrated by Joel Richards. He’s doing a fine job with what he has to work with.