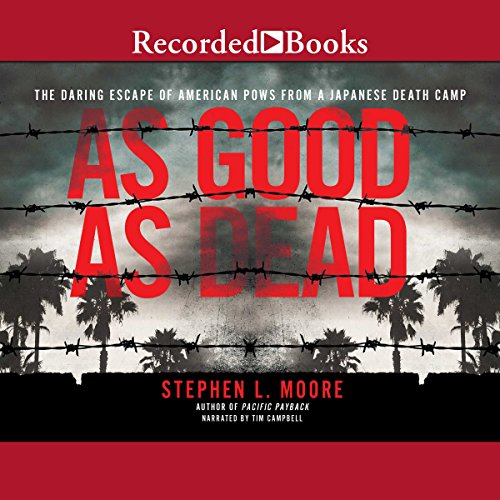 As Good as Dead

By: Stephen L. Moore
Narrated by: Tim Campbell
Try for $0.00

In the tradition of Unbroken, a dramatic story of American POWs in the Pacific and their incredible escape from a Japanese labor camp.

In late 1944 the Allies invaded the Japanese-held Philippines, and soon the end of the Pacific War was within reach. But for the last 150 American prisoners of war still held on the island of Palawan, there would be no salvation. As soldiers, sailors, and marines were herded into shallow air raid shelters, Japanese soldiers doused them with gasoline and set them on fire. By the next morning, only 11 men were left alive - but their desperate journey to freedom had just begun.

As Good as Dead is one of the greatest escape stories of World War II. Endurance, determination, and courage in the face of death make this a gripping and inspiring saga of survival.

What listeners say about As Good as Dead

A question of compassion.

Makes me wonder how hateful a group of people could be even in combat and now our favorite trading partner.

What a powerful story!

What a powerful story patriotism and survival! hide cringed throughout this story as I heard the details of these men's pain and torment endured. How could I have not known anything about this story? I feel a little shame for that, but I'll do what I can to tell others so these men are remembered.

Painful but worth it

This one was brutal. I have read dozens of books on POWs, hostages, and others held by oppressive regimes but this was one of the hardest to get through. I opted for the audio book (9 hours) published in 2016. It covers a group of WWII POWs beginning with the final days of the last stand at Corregidor. It continued through their days of confinement at a camp in Puerto Princesa Palawan through the slave labor, execution to avoid liberation, and for the fortunate few, escape, evasion, and freedom. Like I said, this one was one of the hardest of the dozens I’ve read (or listened to in this case). Read this and you’ll understand why these guys were the greatest generation.

Great book about the men of WWII. These men deserve our respect are true heroes.