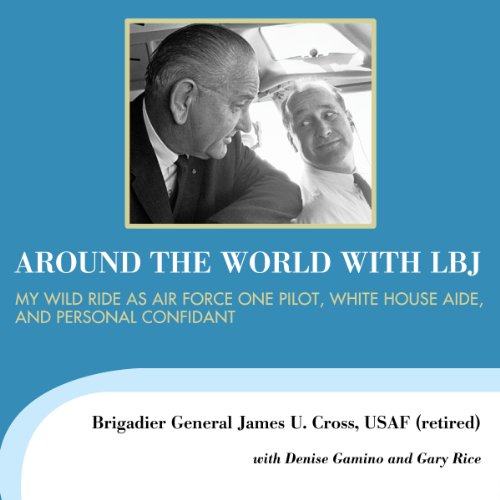 Around the World with LBJ

When Lyndon Baines Johnson wanted to go somewhere, there was no stopping him. This dynamic president called for Air Force One as others summon a taxi - at a moment's notice, whatever the hour or the weather. And the man who made sure that LBJ got his ride was General James U. Cross, the president's hand-picked pilot, top military assistant, and personal confidante. The only Air Force One pilot to have a position, simultaneously, in the White House, General Cross is also the only member of LBJ's inner circle who has not publicly offered his recollections of the president. Until now.

In this book, he goes on the record, creating a fascinating, behind-the-scenes portrait of America's complex, often contradictory, always larger-than-life 36th president. General Cross tells an engrossing story. In addition to piloting Air Force One around the globe, he served President Johnson in multiple capacities, including directing the Military Office in the White House; managing a secret two-million-dollar presidential emergency fund; supervising the presidential retreat at Camp David, the president's entire transportation fleet, and the presidential bomb shelters; running the White House Mess; hiring White House social aides, including the president's future son-in-law, Charles Robb; and writing condolence letters to the families of soldiers killed in Vietnam. This wide-ranging, around-the-clock access to President Johnson allowed Cross to witness events and share moments that add color and depth to our understanding of America's arguably most demanding and unpredictable president.

"What a delightful, honest, and entertaining story Jim Cross tells... his account of that amazing journey -- some of it scarily bumpy, as I can testify -- is a bird's-eye view, from the cockpit of Air Force One, of why character counts." (Bill Moyers)

What listeners say about Around the World with LBJ

Non-political, untold story which shows a side of Lyndon Johnson not often seen. Easy listening.

Enjoyable but a bit too forgiving

I enjoyed the behind the scenes look that the book provides but the author is a bit too forgiving on LBJ’s mistreatment, manipulation, and humiliation of so many of those around around him. I suppose that is to be expected because LBJ gave him such a great career opportunity, but the author never takes even a few words to express his opinion on this aspect of Johnson, even though he does express opinions on behavioral flaws in others throughout the book.

This is a great collection of memories from LBJs life as president. General Cross' narrative shows a unique insight of a man faced with challenging decisions and someone who refused to play by the rules. The book is a casual read and full of laughter.

What made the experience of listening to Around the World with LBJ the most enjoyable?

Bringing the personal side of LBJ to light.

Which character – as performed by Vernon Kuehn – was your favorite?

Jim Cross going to his grave believing that 58,000+ men and women that died in Vietnam did not blemish LBJ's record of leadership takes loyality to a whole new level.

I sincerely hope that US airforce generals are not as dumb as this guy sounds. Should have been a great read but it was pretty hard going.